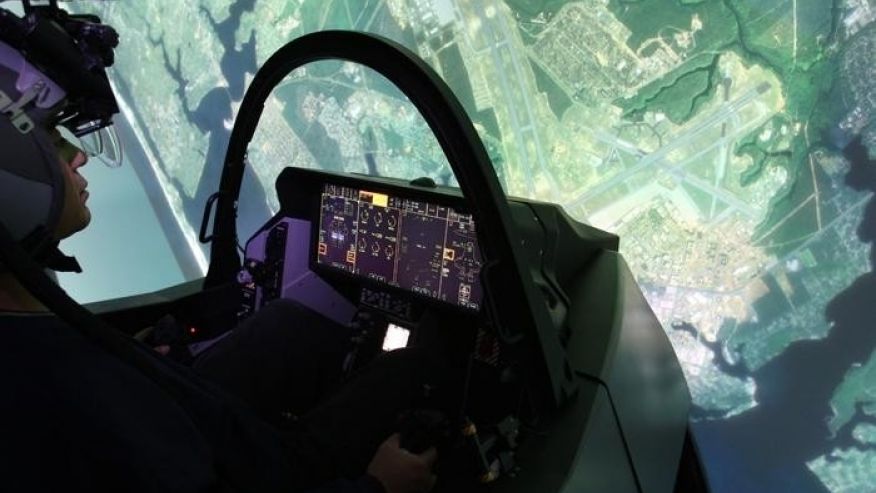 US Air Force pilots are flying the newest fighter jets in a virtual world.

The military’s fifth generation fighter jet, the F-35 Lightning II, will be flown by the Marine Corps, Navy and Air Force. They are not expected to be deployed until 2016 but that’s not stopping Air Force pilots from getting ready to fly missions.

Like something out of sci-fi movie “Ender’s Game,” the pilots can use the new virtual tech to rehearse and hone advanced combat tactics. Since all the simulators are linked, pilots can also practice F-35 operations anywhere in the world, which allows for greater flexibility in training while reducing cost.

Ultra advanced stealth and mega fast at supersonic speeds of about 1,199 miles per hour, the F-35 Lightning II is a fifth-generation fighter jet. Made by Lockheed Martin, the advanced powerful single-seat and single-engine fighter is designed to take on a range of missions with just one aircraft.

The F-35 also features integrated avionics and powerful sensor packages that allow it to gather data, provide state-of-the-art, 360-degree situational awareness so that it can obtain information on targets and threats for rapid, effective strikes. The idea is that with the tech, F-35 pilots can spot enemy aircraft first -without being seen – and take decisive action.

The plane, however, has come under intense criticism due to its cost and delivery delays.

Because of the cost, Sen. John McCain, an Arizona Republican, said earlier this month that the Pentagon may have to consider reducing the numbers of planes it orders. Originally, 1,043 of the 2,443 jet were supposed to be delivered by next September, McCain said, according to Bloomberg. So far, only 179 have been handed over.

“That leaves well over 2,000 to complete the program” so “we would have to purchase 100 F-35s per year for more than 20 years at a cost of $10 billion to $12 billion a year,” said McCain, who spoke earlier this month at a reporters event organized by the Christian Science Monitor.  “That seems unlikely, and all that assumes the F-35 will provide the necessary capability.”

The Marine Corps announced their F-35s had reached operational status this past summer, while the Air Force aims for their F-35s to be combat ready next year and the Navy in 2018.

Related: How US firefighters could harness the power of military drones

The Air Force is preparing for the initial F-35 operations with the help of the F-35 Training System. It includes virtual simulators that features virtual tech with enhanced accuracy that replicates the real cockpit and flying environment.

In all of the high-fidelity simulators, pilots are challenged with realistic experiences. Pilots can train on all three aircraft variants: the F-35A conventional takeoff and landing (CTOL) variant, the F-35B short takeoff/vertical landing (STOVL) variant, and the F-35C carrier variant (CV).

For example, pilots may want to practice tricky takeoffs and landings like a Shipborne Rolling Vertical Landing. They can also use the simulators to develop tactics with the new aircraft such as for dogfighting or air combat maneuvering. Pilots can practice using the F-35s new capabilities to maneuver and gain an advantage over an enemy fighter, for example.

The pilots are also using the virtual tech to practice flying the F-35s together against both ground and airborne threats that include enemy aircraft and drones.

Thus far, more than 140 Air Force pilots and 840 maintainers have been qualified through the F-35 Training System.

By August 2016, there will be nearly 200 F-35 pilots mission ready and the first pilots are expected to come from the 34th Fighter Squadron at Hill Air Force Base in Utah.