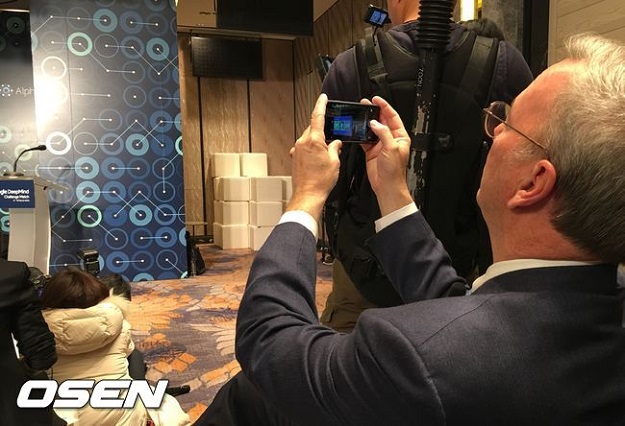 Current Google chairman (and former CEO) Eric Schmidt was recently in South Korea to witness the historic battle between Google’s most advanced AI system and the world’s top-ranked Go player, a matchup which resulted in a win for Google’s computer.

While there, Schmidt was spotted using what appears to be an iPhone 6 or 6s. In the first photo (visible above and provided courtesy of OSEN), we see Schmidt using his iPhone to take a picture. And in the second, we see him in the process of selecting a particular photo to send off to a friend.

That Schmidt would be caught using an iPhone in public is certainly amusing, but it is by no means completely out of character. Schmidt, if you recall, did spend a considerable amount of time as an Apple board member and, if you recall, was even spotted using a Blackberry while he was still serving as the CEO of Google.

Of course, there’s nothing wrong with the chairman of Google using an iPhone. If anything, it’d be a bit bizarre for anyone high up on the Google food chain to not be familiar with the company’s chief mobile competitor. That said, the candid shots of Schmidt using an iPhone are more funny than they are controversial. After all, you might recall that Schmidt had this to say following Apple’s iPhone 6 unveiling: “I’ll tell you what I think. Samsung had these products a year ago.”

In a similar vein, you might recall that Microsoft Windows Phone VP Joe Belfiore was recently caught tweeting from an iPhone. Addressing the issue head-on, Belfiore explained that part of the job involves understanding the competition.

On a 9-month leave-of-absence, I have a HUGE AND UNUSUAL opportunity to get to know these products deeply. To understand the benefits and drawbacks of a full ecosystem like Windows, Android, iOS — you have to LIVE IN IT. You have to feel its strengths and weaknesses, be let down, be delighted. And you can’t do that just “playing around” with a device for a couple of days. You have to learn the UI, upload your photos, use cross-device apps and tools… all of it.