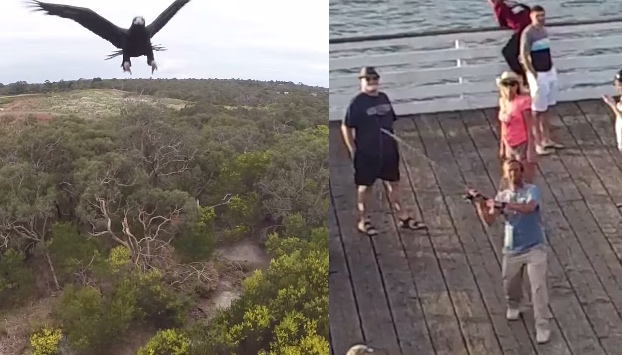 In what seems like the blink of an eye, drones went from something only gadget enthusiasts obsessed over to mainstream machines you can now pick up from places like Toys”R”Us for just $25. In turn, the number videos on YouTube featuring drone footage has skyrocketed in just the last few months alone. In the process, we’ve also seen an increase in drone related mishaps.

In the last week, two such drone ‘disasters’ made their way around the web. While one might think that flying a drone in the open skies should be a worriless affair, the following videos prove otherwise.

In our first video, we have an irritable fisherman who isn’t comfortable with the idea of a drone flying overhead. So he casts his fishing line into the sky and actually manages to hook it to the drone! The drone stutters a bit, but because the fisherman didn’t reel in his ‘catch’, the drone was able to fly to shore.

The next video is also pretty wild. What we have here is an Australian wedge-tailed eagle, also known as an eaglehawk, attacking a drone mid-flight. The drone tumbles to the ground immediately upon impact, though it sure would have been cool if the eagle managed to snag it and take it back to its nest.

Not to worry, the eagle is reportedly fine and the attacked drone was operational after $100 worth of repairs.

It’s hard out there for a drone, apparently. Just a few weeks ago, a man made national news after shooting down his neighbor’s drone with a 12-gauge shotgun.