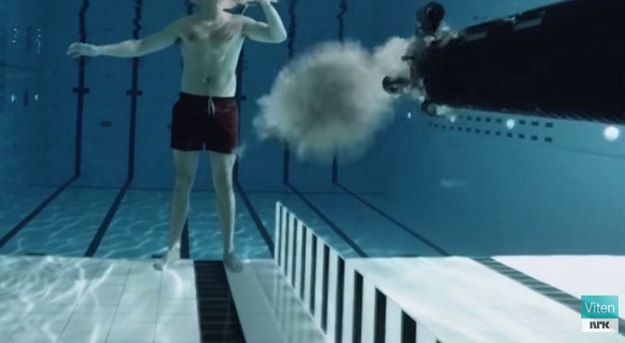 Physicists love conducting strange, if not wholly bizarre and seemingly dangerous, experiments in order to showcase whatever scientific principles they’re trying to impart to students or the public at large.

Most recently, physicist Andreas Wahl decided it’d be a grand idea to hop into a pool with a loaded gun and, you know, try to shoot himself underwater. Of course, given that water is much denser than air, Wahl’s underlying point was that he wasn’t really putting himself in danger at all. Still, it takes a whole lot of guts to go through with a maneuver like this.

As you can see in the video below, Wahl set up a gun underwater and affixed it with a string so that he could pull the trigger himself. A slow motion camera strategically positioned adjacent to the gun captures the entire chain of events in crisp detail.

“It’s harder to create movement in water than in air, because water molecules are closer together than air molecules,” the YouTube description reads. “To show the difference in resistance, physicist Andreas Wahl puts himself in front of a weapon submerged in water and fires it – on himself.”

Of course, this isn’t the first time we’ve seen someone employ a gun in order to prove a point. Even a cursory glance around YouTube reveals no shortage of videos featuring people wearing bulletproof vests purposefully being shot at close range.

Wahl wanted to explain Newton’s second law of circular motion and how objects with a centripetal force (which compels them to travel in a curved path) spin faster as they reach a central point. So, from a pole at an abandoned Norwegian warehouse, he hung 14 meters (46 feet) in the air without any sort of safety equipment, attached only to a rope with a kettleball on the end. Theoretically, as he fell, the rope with the weight would spin around the pole to which it was attached faster, and essentially get caught in time to prevent Wahl from hitting the ground.