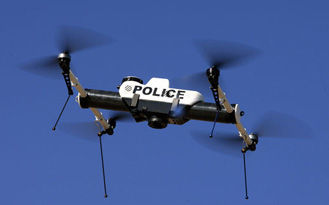 It has all the makings of a terrible early-’80s frat comedy: A college kid receives an expensive aerial drone in the mail and hilarity ensues involving drone-assisted beer runs and raids of girls’ dorm rooms. Amazingly, Motherboard reports that something very similar actually happened recently when a college student in the Boston area accidentally received parts of a $350,000 aerial drone in the mail and posted pictures of it on Reddit. Motherboard confirmed that the drone is actually the property of the National Ocean and Atmospheric Administration (NOAA) and the agency has told the publication that it’s not sure exactly how the drone wound up in the student’s mailbox.

“We sent one of our Puma unmanned aircraft systems to Stellwagen Bank Marine Sanctuary in Massachusetts,” an NOAA representative told Motherboard, who also said that the drone is capable of flying for around two hours at a time and has an eight-mile radius. “We sent a set of about eight boxes for this one aircraft system, and one was misdelivered by UPS. We’re working with UPS to find it.”

In other words, if the college student is going to try assemble the drone and use it to commit zany antics, he’d better do it soon because the mean old federal government is coming to ruin his fun Dean Wormer-style.