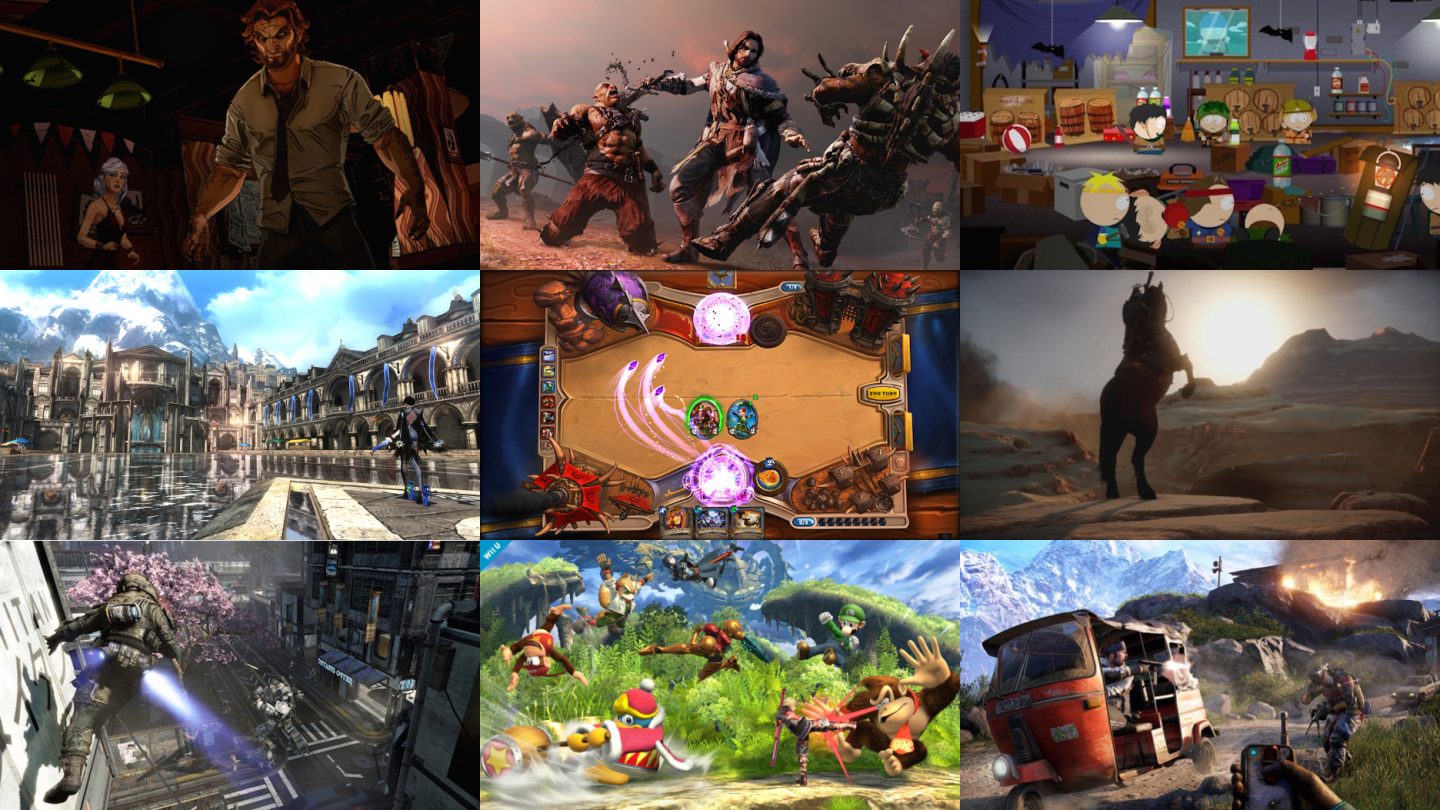 The first full year of the new generation is coming to a close. After much deliberation, I’ve settled on the ten games that stood out above all of the rest. These were the games that delighted me in 2014 — the games that I kept returning to, the ones I kept thinking about even after I’d put them back on the shelf.

I didn’t have a chance to play every game released this year, so if your favorite game didn’t make this list, it’s probably not because I hated it — I just didn’t get around to playing it.

So without further ado, here are BGR’s top ten games of 2014:

10. South Park: The Stick of Truth

No other game in 2014 made me laugh as hard or as often as South Park: The Stick of Truth. This bizarre RPG featured an engaging combat system, a fully-realized world and some of the best writing of any South Park adventure in a decade. A dream come true for fans of the series.

I’ve said it before, but The Stick of Truth has become my new favorite South Park episode. That’s not really fair since it’s definitely not an episode of the show, but it draws upon the same energy on display during some of the show’s best moment, often mining the characters and storylines that we all love without retroactively ruining them or becoming too self-referential.

There were half a dozen games vying for this position in my mind, but I kept coming back to The Stick of Truth. It’s the South Park game I never thought would exist. But here it is.

There were few games with bigger profiles than Titanfall as the new generation began to take off. The expectations were insurmountable, but somehow Respawn Entertainment still managed to put together the most compelling online shooter I’ve ever played.

Titanfall doesn’t have the same hooks that keep gamers obsessed with every new Call of Duty entry for months on end, but it’s this purity that makes the game so much fun. Once you learn the mechanics and develop a play-style — some prefer to be in a mech, some prefer to stay on foot, others split their time evenly between both — it’s hard to go back to games with less dynamic action.

No other shooter has come close to capturing the spirit of contained chaos quite like Titanfall, and I don’t think anything will until Titanfall 2 makes it way to store shelves.

8. The Wolf Among Us

At first, Bigby Wolf appears to be your prototypical brooding detective with a sordid past, but it’s not long before Telltale imbues him with a life of his own. Each of the Fables feels fully fleshed out, an impressive feat for a story that seems to be balanced ever so carefully on a gimmick that could fall flat at any moment.

Telltale is in the middle of producing their largest slate of games in their short history, but I can only hope they’re putting aside some time to begin working on the second season of The Wolf Among Us.

7. Super Smash Bros. for Wii U

For countless Wii U owners, Super Smash Bros. has been the most anticipated release of the generation so far. More than six years after Super Smash Bros. Brawl released on the Wii, the latest edition of the franchise is finally here and better than ever. It looks amazing, it plays as well as any of the other entries and it has more modes than you’ll know what to do with.

Having spent hours with both the 3DS and Wii U versions of the game, I think I can admit that I’d be fine with this being the last entry in the series from Masahiro Sakurai’s team. It’s not that I don’t think they could continue to improve upon the formula, but I just can’t imagine it getting any better than this.

I have to admit, I’m still sore over the absence of the Subspace Emissary adventure mode, but this is still a must-have game for anyone with a Wii U. And yes, Amiibo are highly addictive.

Bigger doesn’t always mean better, but in the case of Dragon Age: Inquisition, next to nothing is wasted. This sprawling epic is a return to form for BioWare, melding deep gameplay systems with genuine, passionate storytelling that will sweep you up for dozens and dozens of hours.

I went in without much knowledge of the series (having only played several hours of Dragon Age: Origins), but as a BioWare fan from Neverwinter Nights and Knights of the Old Republic, I was thoroughly impressed by the improvements the studio has made to the way characters interact with one another and the relatively fast-paced nature of the action.

Oh, and it’s incredibly gorgeous. One of the biggest and best looking games of the year. It’s been a long wait, but RPG fans finally have something to dig in to on the current-gen consoles.

One of the best third-person action adventure games in years, Middle-earth: Shadow of Mordor blew everyone away. Licensed games aren’t as uniformly terrible as they used to be, but it’s still a shock when one turns out as well as this.

Shadow of Mordor is incredibly violent, perfectly tuned and unafraid of straying from the path laid out by its predecessors. This isn’t “another Lord of the Rings game” — it’s a new beast entirely, and the nemesis system is what’s holding it all together. I’ve never been as invested in killing random baddies as I was during my time with Shadow of Mordor. Seeing the same faces throughout my adventure grounded the world in a way that character development and detailed visuals couldn’t.

If developers are going to steal things from 2014 for their upcoming games, I highly recommend they take a thorough look through Shadow of Mordor.

I’m a sucker for incomprehensible video game plot lines. Final Fantasy X, Asura’s Wrath, Metal Gear Solid — they’re all dear to my heart, and in 2014, I added Bayonetta 2 to that list. Maybe it was my complete lack of expectations going into Platinum Games’ miraculous sequel, but I still can’t figure out how a game that never should have existed in the first place turned out this good.

No, it’s not a major leap forward from the first Bayonetta. No, it doesn’t cater to casual players. But the things it does do, it does better than anything else on the market. Nothing is more satisfying than dodging a swing from an enemy in Bayonetta 2. Nothing is more rewarding than getting an Pure Platinum ranking in a battle you never thought you could.

Many critics have said that 2014 was the year that the Wii U proved it could hang around with the big boys despite its early struggles. I’m not sure if I agree, but if Nintendo can continue to service the niche markets that have been dominated by indie developers in recent years, they’ll certainly keep my Wii U from getting dusty any time soon.

It’s an idiom I’ve alluded to more than once while writing about games over the past few years, but it’s very difficult to fix what isn’t broken. Far Cry 3, despite the collective grievances against its plot, was one of the standout first-person shooters of 2012. It took the distinctive elements of a peculiar series and mashed them together with design decisions that would attract a larger audience.

How do you improve upon that? In the case of Far Cry 4, you just do it all over again, but bigger and better. Far Cry 4 is everything you loved about Far Cry 3, but now you can ride elephants, scale mountains and storm fortresses. It’s far bigger than an expansion, but it’s not a true sequel either.

It’s not always the case, but for me personally (and apparently for many critics as well), I just wasn’t done with Far Cry yet. I had enough left in me for another go-round. So did Ubisoft.

I spent more time playing Hearthstone this year than every other game on this list combined. It’s the digital collectable card game to rule them all. Simple to learn, difficult to master; nothing else even competes. Once you get sucked in, Hearthstone will never let you go.

One of the joys of Hearthstone has been interacting with and learning from the rabid community that has formed around the game. There is an active competitive scene, dozens of sites dedicated to crafting decks and discussing strategy and Blizzard is more than willing to foster these crowds.

Now that Goblins vs. Gnomes, the game’s first expansion, has been released, the meta has changed irreversibly. Everything we knew about the game has changed, which means I might just have a chance at climbing the ladder this month. Perhaps unexpectedly, Blizzard is doing free-to-play better than anyone else.

This should have been a difficult choice, but no game provided me with as many highs and as few lows as Forza Horizon 2. I’ve been enamored with open-world racing games since Burnout Paradise, but no other world drew me in quite like the world of Horizon 2.

There’s something about southern Europe that gives Horizon 2 it’s own personality. It’s often difficult to distinguish between racing games, but Horizon 2 is unmistakably unique. The road trips, the barn finds, the championships, the way that everything you do brings you closer to a new car or reward; it’s a joy to play from start to finish… if you ever finish it, that is.

I didn’t think I needed another open-world racer after Need for Speed: Most Wanted climbed into my top 10 list in 2012. Forza Horizon 2 proved me wrong.

Think I totally nailed it? Want to point out how each and every one of these games didn’t even make your top 50? Either way, I’ll totally understand. Feel free to share your own list in the comments below.