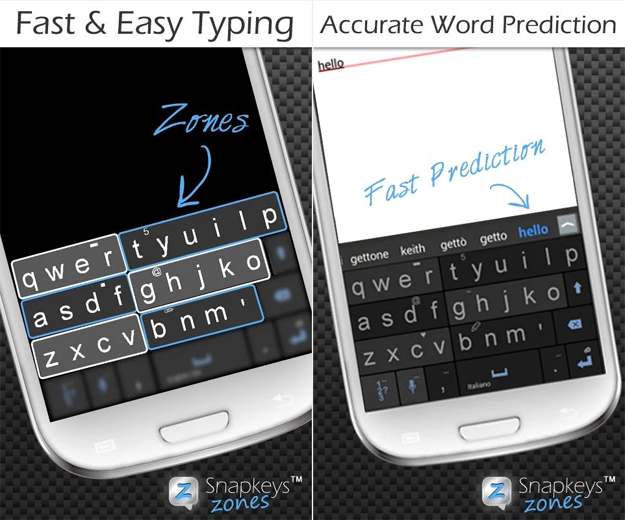 Text input is one of the most frequent functions we perform on our smartphones, and not every virtual keyboard is right for every user. Some platforms limit our options — though that will soon change for iOS device owners — but Android’s open nature means that dozens of solid third-party keyboard options are out there for people looking to improve this crucial part of the smartphone experience.

We’ve all heard of the more popular third-party keyboard options for Android, such as Swype and SwiftKey, but a new lesser known option has the potential to completely change the way you use your smartphone or tablet.

Snapkeys Zones is currently an open beta for Android devices that’s free to use for one month, and it is unlike any keyboard you have ever used before. The keyboard’s main feature seems bizarre at first, but it’s actually quite brilliant: Instead of having 26 individual virtual buttons, Snapkeys zones has only 6 buttons for all 26 letters of the alphabet.

It sounds crazy. It’s not.

I was very skeptical at first, but after watching the video I decided to give it a try. It not only works, it works surprisingly well.

Even with larger “phablets,” accuracy is always an issue when typing quickly on a virtual keyboard. Because predictive software is so advanced these days, however, we don’t need to be accurate.

With Snapkeys Zones, you don’t have to aim for a specific letter anymore. You just have to aim for the zone and the keyboard’s prediction engine does the rest. It takes a bit of time to get used to but once you get going, you’ll type faster and more accurately than you even have before.

The keyboard is currently in beta but it has worked very well in my tests. It’s also terrific for large tablets — Snapkeys is resizable to suit the user’s preference and it’s much easier than typing on a giant tablet keyboard.

A video showing how the app works follows below along with a link to the download from Google’s Play store.