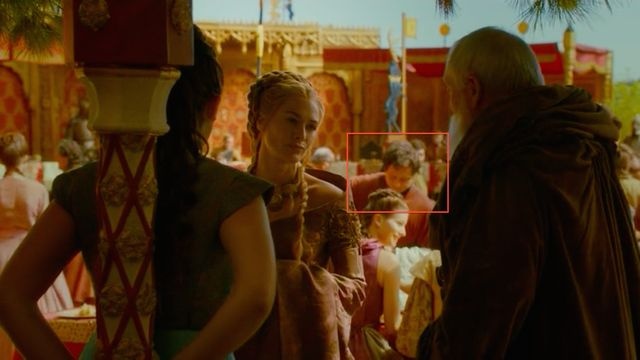 We’ve spent five seasons exploring the land of Westeros with our favorite (and least favorite) characters on Game of Thrones, but what would it be like to actually visit George R.R. Martin’s fictional world? One fan got to find out when he was cast as an extra for the infamous Purple Wedding scene in season four.

READ MORE: Microsoft says the Xbox One is ‘doing things that can’t be done’ on the PS4

“Being an extra on Game of Thrones is an amazing experience,” writes Quora user Felipe Ferri. “I was fortunate enough to participate in King Joffrey’s wedding feast as a servant. That scene was shot in Dubrovnik, Croatia, an incredibly beautiful historical city at the shore of the Adriatic Sea.”

Ferri goes on to admit that he had only managed to work his way through the first book before he traveled to Croatia to shoot the scene for HBO, so he was shocked to discover one of the main characters would perish during his visit. But of all the ways to be spoiled on a major Game of Thrones moment, this was one that Ferri was willing to accept.

Ferri says that the cast were as nice as he’d hoped they’d be, and he even managed to snag photos with King Joffrey, Tyrion and Cersei Lannister before the shoot was over.

As for the actual work schedule, here’s what Ferri had to say:

“The five days I spent on the set were amazing. They were intense – we had to meet at a pickup point at 4 AM and were dropped off at the same point at 7 PM, but everything was so exciting that even the long hours didn’t matter. We spent the whole days in our costumes, and it was amazing to be surrounded by noble men and women, soldiers, servants and maids. It is funny that you kinda begin to think that everything is real, and you kinda start to think that the guys in armor are really soldiers, though they’re regular people just like you.

It is kinda scary, if you think about it. It was also extremely funny the anachronisms that you see in a place like that. Though your brain is starting to accept that you are in a medieval world, suddenly when you look to the side you see a servant typing on his iPhone, or a City Watch guard smoking a cigarette, or an old nobleman drinking boxed juice…”

Sounds like quite the experience! Maybe if Ferri can get a small part in season 6 he can let us know once and for all whether or not Jon Snow is really dead.