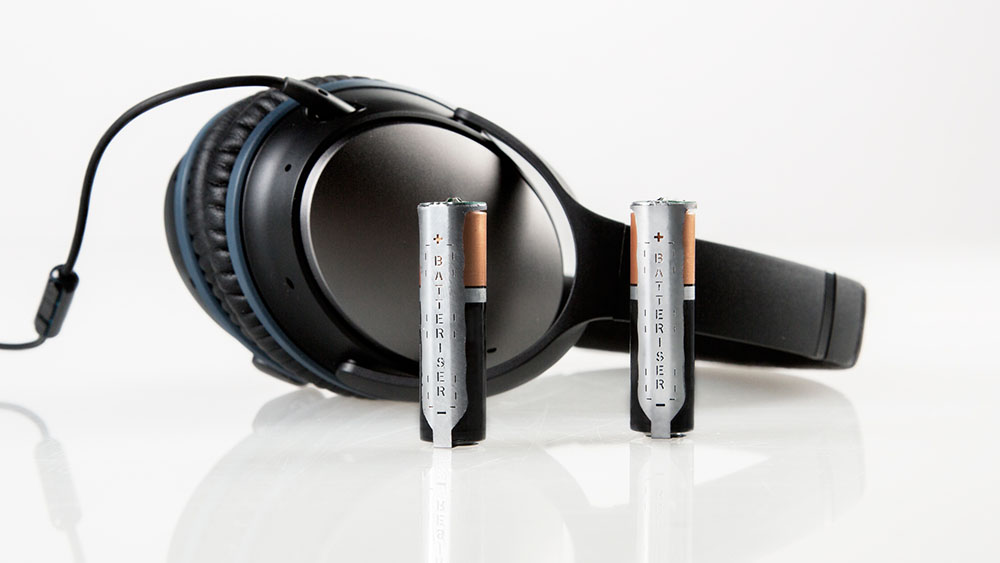 While lithium-ion batteries are all the rage these days, we still do use alkaline batteries for a lot of our important household gadgets. However, these batteries are often woefully inefficient and use up only 20% of their stored energy before they become effectively useless. However, a new device called Batteriser promises to fix this problem by boosting your disposable batteries’ lives by up to 800%.

The Batteriser, which is made by San Jose-based company Batteroo and which will sell starting at $10 for a four pack of devices starting in September, has been designed to work with AA, AAA, C, and D-cell batteries. The devices are basically tiny sleeves that attach directly to your batteries and try to extract as much juice as they can out of them before they finally expire.

While the device won’t be ready for market for another three months, it has been delivering in field tests so far.

“When we get a new battery it is 1.5 volts, when we use it in a device it goes down to 1.3 volts under load condition, at that point we consider it to be dead and throw it away,” explains Dr. Kiumars Parvin, Professor of Physics at San Jose State University. “We tested the Batteriser sleeve in our lab and we confirmed that the Batteriser taps into the 80% of energy that is usually thrown away.”

Jon Phillips writes over at MacWorld that he saw the devices in action and that they worked as advertised. He also says that while battery extenders have been around for a while, the Batteriser is really remarkable for its thinness, as the device measures in at 0.1 millimeters thick.

Check out Batteroo’s full press release below and learn more about its product by checking out its website here.

SAN JOSE, Calif. June 2, 2015 – Every year, over 15 billion disposable batteries are consumed globally. What most consumers don’t realize is that most devices only tap 20% of a battery’s energy before the device stops functioning, and the batteries are thrown in the trash. Batteriser lets you tap into the remaining 80 percent of energy that is usually thrown away. The result is batteries last up to 8x longer.

Batteriser is a reusable sleeve that slips over new or most “used” batteries, and instantly taps into the remaining energy that is usually thrown away. Crafted from stainless-steel at less than .1 millimeters thin, Batteriser sleeves are designed to easily slip over your battery and fit neatly back into your device.

A typical disposable battery can have as much as 80 percent of its energy remaining before electronic devices regard it as powerless. Batteriser is able to access that wasted energy much like a drinking straw allows us to reach the bottom of a glass. Batterisers can also be used with new alkaline batteries for similar savings and performance gains.

Batteriser, currently the only device of its kind, will be available for AA, AAA, C, and D-cell batteries. Retail prices will start at under $10.00 for a four pack of Batteriser sleeves.

Batteroo Corporation was cofounded by Bob Roohparvar Ph.D., who holds more than 20 patents in his 30-year career. Roohparvar is no stranger to disrupting the power management industry, with a prolific patent portfolio. His career spans power management, semiconductors, and consumer products. Dr. Roohparvar is also a professor at California State University, East Bay, teaching computer science and computer engineering courses.

“Batteroo is the first to unleash existing unused power from a seemingly powerless battery, and by extending battery life by up to eight times, Batteriser pays for itself with the very first purchased pack,” said Roohparvar. “Why throw away perfectly good batteries, or waste money buying new batteries, when we now have a technology that saves money, saves energy, and can cut the number of batteries that end up in landfills by more than half.”

“When we get a new battery it is 1.5 volts, when we use it in a device it goes down to 1.3 volts under load condition, at that point we consider it to be dead and throw it away” said Dr. Kiumars Parvin, Professor of Physics at San Jose State University. “We tested the Batteriser sleeve in our lab and we confirmed that the Batteriser taps into the 80 percent of energy that is usually thrown away.”

The $14 billion disposable battery market is estimated to be powering 5.4 billion battery-operated devices – That’s 15 billion batteries consumed annually worldwide. Only approximately two percent of these batteries are disposed of properly. The rest are thrown away, leading to soil contamination and a laundry list of negative environmental impacts.

Rooparvhar credits the innovation to an intelligent voltage management and delivery mechanism. Batteroo introduces this system in the format of a sleeve that makes contact with the positive and negative ends of a common battery to access untapped remaining energy at a steady state system voltage.

Batteriser harnesses untapped battery energy and at the same time saves the consumer money and is environmentally friendly by sparing landfills from unnecessary toxic battery waste.