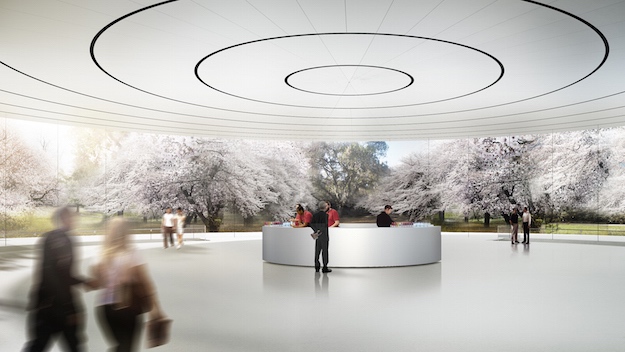 With Apple set to move into its new spaceship campus in January of 2017, the company today shared some progress updates on its construction efforts with Mashable, alongside some new renderings of the building. Of particular interest is the progress Apple is making on its new “Theatre”, the location where Apple is planning on holding product events in the future. Due to space constraints, Apple today has to resort to renting out third-party buildings, such as the Yerba Buena Center for the Arts in San Francisco, when it holds special media events. Once the company’s new campus is complete, all product introductions will take place right in Cupertino.

The details surrounding Apple’s new theatre are impressive. The space itself occupies about 120,000 square feet and is completely underground. According to reports, the new theatre will be able to accommodate upwards of 1,000 people. Additionally, the lobby of the theatre, which will be on the ground level, will provide visitors with a stunning 360 degree view of the surrounding area, all thanks to gargantuan pieces of glass.

All the more impressive is the roof adorning the theatre; all told, it’s an 80-ton monstrosity that was manufactured overseas and had to be shipped to California in separate pieces.

“But perhaps the most stunning addition is its roof, which Apple believes is the largest freestanding carbon-fiber roof ever made,” the Mashable report notes. “Created by Dubai-based Premier Composite Technologies, it’s a massive statement piece, in addition to a design feat. But please, Apple doesn’t want you to call it a UFO. The roof was added to the Theatre last month.”

“The circular roof is made up of 44 identical radial panels averaging 70 feet long and 11 feet wide,” the report adds, “and each connects to a small central hub positioned in the middle.”

For a number of reasons, Apple’s new spaceship campus has the makings of an architectural marvel. In fact, the gargantuan glass windows which will adorn the outside of the new building required the creation of an entirely new piece of construction equipment in order to secure them in place. By the time the dust settles, the new building will have 3,000 curved glass panels around the perimeter, which will measure in at about a mile in circumference.

Make sure to head on over to Mashable via the source link below for the full selection of new photos from Apple’s spaceship construction efforts.

For a more aerial view of Apple’s progress on his new headquarters, AppleInsider took the following drone video footage of the construction site earlier this month.