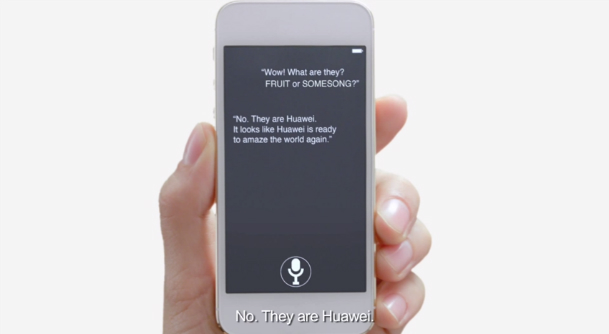 Huawei posted a video on YouTube teasing some of the products it will unveil at the upcoming MWC 2014 show in Barcelona, Spain, while taking shots at the biggest names in the mobile world, Apple and Samsung. In the video, a Siri-like assistant is telling an iPhone owner about the new mobile devices coming at MWC including a “new tablet with a beautiful slim design,” that will offer a “huge battery” capable of offering you “days of use.” Furthermore, there’s “a smartphone with an amazing front camera,” and “a new multimedia tablet that gives the ultimate entertainment experience” on the way. Finally, an amazing “one more thing” can even support the next generation LTE network.

The assistant then reveals that the company behind all these new products is neither Fruit, nor Somesong, but Huawei, which is “ready to amaze the world again.” While making fun of competitors in the short teaser video, Huawei is also acknowledging that Apple and Samsung are still the most important mobile device makers in the business, which companies have to beat to get the customer’s attention.

Huawei is expected to announce its new products on February 23, Android Police reports, a day before Samsung will unveil its Galaxy S5 flagship at MWC. As always, Apple will not be present at the Spanish trade show.