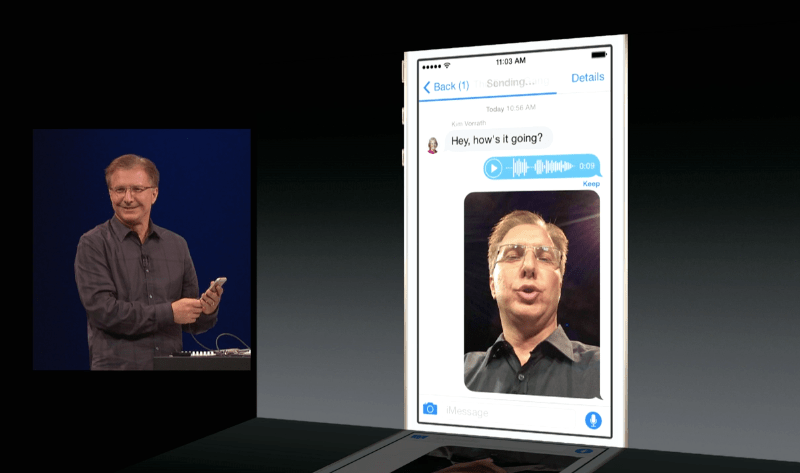 This is not the first time Apple has sent a chill down the spines of mobile carrier executives. Years ago, the launch of the iMessage platform on iPhone was a quite obvious and direct attempt to undermine carriers’ highly lucrative text-messaging business. Over the past couple of years, though, it hasn’t been iMessage that has undermined SMS revenues around the world — it has been the cluster of cross-platform messaging apps like WhatsApp, LINE, Kakao, WeChat, etc.

Each of these apps has hundreds of millions of users, each has been adding new features at a feverish clip while burrowing a bit deeper into consumers’ everyday lives. LINE and Kakao are now becoming centers for video clip sharing, game purchasing, manga reading and music discovery.

And now it’s time for Apple’s furious counteroffensive — the tech giant that missed the mobile messaging app revolution almost entirely is now forced to catch up. It may end up doing some real damage to mobile carriers in the process.

Many of the iMessage features that Apple is now highlighting are directly lifted from the most successful messaging apps: Easier ways to shoot and share video clips, intuitive voice messages, more prominent location sharing, etc. These are all catch-up moves that are to some extent undercut by the fact that Apple is late and iMessage is not cross-platform.

But Apple is also throwing in new features that could make an immediate splash: Mobile voice calls and text-messaging handled directly on Mac screens. Computer integration is something that messaging app giants like WhatsApp and LINE have not done well and it’s something that is potentially quite disruptive. Why didn’t Apple add SMS and mobile voice for its computers years ago? Probably because it didn’t want to upset its mobile operator partners, who hate and fear such features.

Various industry studies show that more than 70% of mobile calls originate from home or office. 77% of mobile search happens at home or work. Mobile search happens on phones at home because consumers are responding to something in a voice call or a text. People could be taking these calls on their laptops or tablets – and doing search on those. They could learn to reroute their mobile voice and text volumes out of their mobile handsets.

Needless to say, operators are not amused by this prospect. But Apple may now be so big and powerful it no longer needs to pay any mind to what carriers prefer. The way messaging apps like LINE and Kakao are transforming daily routines of consumers in Asia is now so scary to Apple it is willing to anger carriers to start battling these apps more directly and forcefully.

Facebook just paid $19 billion for WhatsApp after it realized it had missed one of the biggest consumer market trends of the decade. Apple is now attacking messaging apps head-on instead of accepting the cross-platform philosophy. It will be fascinating to see how Google and Twitter choose to respond next.