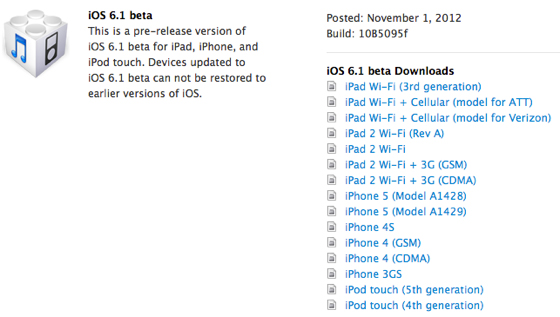 Hot off releasing iOS 6.0.1 for iOS devices, Apple (AAPL) released iOS 6.1 beta to developers to begin testing. iOS 6.1 beta carries the 10B5095f build number and includes improvements to Apple’s “Map Kit Searches” that AppleInsider says let “developers search for map-based addresses and points of interest.” As AppleInsider also notes, the beta “is available for the iPhone 5, iPhone 4S, iPhone 4 and iPhone 3GS; fourth-, third- and second-generation iPads; and the fifth- and fourth-generation iPod touch.” Beta versions for the iPad mini have not yet been released.