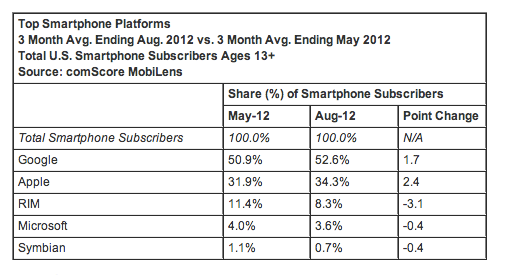 To little surprise, Android has not only remained the most popular smartphone operating system in the United States by a wide margin, but Google’s (GOOG) platform continues to see impressive growth in an over-saturated market. In a three-month study ending in August 2012, research firm comScore found that Android was on more than half of all smartphones in the U.S., increasing from 50.1% in May to 52.6%.

Apple’s (AAPL) iOS platform also saw significant growth, jumping 2.4 percentage points to 34.3% of all active smartphones prior to the launch of the iPhone 5. The study resulted in additional bad news for Research in Motion (RIMM) and its BlackBerry operating system as it continues to fall into irrelevance. The Waterloo-based company saw the greatest drop, falling more than 3 points from 11.4% to 8.3%, compared to Microsoft’s (MSFT) Windows Phone platform, which fell only slightly to 3.6%. An additional chart follows below.