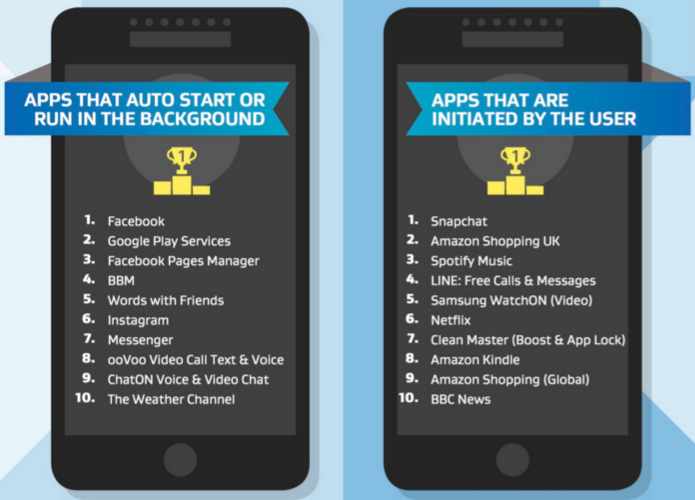 Many people have complained that Facebook is a major battery hog on iOS 9 devices, as the mobile app seems to consume plenty of juice even when it’s been expressly told not to run any activities in the background. But it looks like Facebook is also the most battery-unfriendly app on Android, according to a fresh report on the least energy-efficient apps in Google’s Play Store.

According AVG’s Android App Performance Report for the second quarter of the year, a bunch of Facebook-owned apps are present in the top 10 apps that consume a lot of power, including Facebook, Facebook Pages Manager, Instagram and Messenger.

Facebook takes the crown for consuming the most power at start up, while Snapchat is the most battery-unfriendly app during run time. The report also highlights other battery-hogging processes on Android devices, including a Samsung Android update program that allows updates via Wi-Fi and Google Play Services.

The Weather Channel and Words with Friends are seen as surprising entrants in the chart, as the apps have no apparent need to run invisibly in the background. Amazon’s shipping apps are also going to consume plenty of battery life, AVG has discovered (see infographic below).

To save energy especially on a device that has poor battery life and/or battery-saving features, you should consider uninstalling some of the apps in AVG’s charts. If that’s not doable, then you might want to grab a spare external battery pack for your device to supplement your energy needs.

Google’s Android 6.0 Marshmallow update should let you better manage app permissions in the future, and should offer assistance with battery consumption. However, only certain Nexus handsets and tablets have been updated to Android 6.0 for the time being.