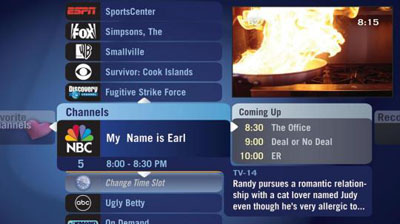 Rarely does a factory cable interface sooth the tech-savvy beast. They’re clunky, slow, and can delete all your season passes without warning (stupid Comcast). People have adopted TiVo largely because of its user-friendly interface. So much so, that TiVo is now a verb (always a sign of high-status). For those looking for a different alternative to their cable box or TiVo, Digeo is offering Moxi. With a surprisingly sexy interface, Moxi boxes offer some goodies that your cable box doesn’t:

All it will take is a Cable Card, and you’ll be on your way. Release date i set for this Fall, and no word on pricing. The ultimate silver lining? No subscription fee. Sweet. Now if we could only get Cable Card 2.0 so we can get our On Demand fix…