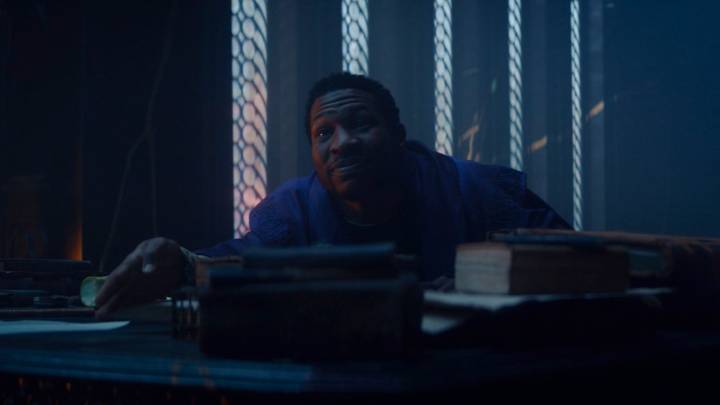 The highly-anticipated Loki finale last week brought us the conclusion to this first season and what a ride it has been. We got a great Loki story and a fantastic primer on the multiverse rules. We still have many questions about the multiverse, but Marvel has finally given it prime placement into its stories. The Loki finale also brought us the big bad villain of the season. It was a strange reveal, as it came in the final episode of the show. And it contradicted Marvel’s playbook. We didn’t expect a big MCU villain reveal on Disney+, but that’s what episode 6 delivered. You probably know by now that Kang appears in the Loki finale. But the actor just teased in Disney’s new Assembled installment that we haven’t even seen the big Marvel villain — beware, other major Loki spoilers follow below.

Many expected Kang (Jonathan Majors) to make an appearance in the finale. But a post-credits cameo seemed more likely than what Marvel did. Loki put Kang front and center from the start, and Majors’ performance dominated the episode.

But this version of Kang went away as fast as he appeared. Sylvie (Sophia Di Martino) killed He Who Remains, as no amount of reasoning from Loki (Tom Hiddleston) could appeal to her rationality. He Who Remains is actually the better version of Kang, the one who tries to prevent multiversal war and keep the peace in the Sacred Timeline. Even if that means using the TVA to destroy lives and entire alternate realities.

The real ‘Loki’ villain is a different Kang

Disney released the new Assembled documentary episode that follows the latest TV show finale. It’s there where Majors explained how he delivered this first of hopefully many versions of Kang.

He explained that “the Wizard of Oz, Sunset Boulevard, Citizen Kane, [and] Willy Wonka and the Chocolate Factory” served as inspiration for the role. Majors looked for “the archetype of the wizard and what happens to him when he gets bored and becomes a trickster.”

“I think when we meet He Who Remains, he’s on the borderline of those two things. You don’t really know where he’s at, and I think the ambiguity of that is one of the wicked things about it,” the actor said.

Kang is one of the reasons why you should rewatch the Loki finale. Just dedicate a session to focusing on the way Majors plays this villain version. Forget the plot and the other actors in the room. Majors gives us an excellent “demo” of what he can do with Kang. He Who Remains is bored. He is a trickster. This Kang appreciates the irony and hilarity of the situation. And he is somewhat funny. All that is incredibly scary, as you realize how dangerous this man is.

Majors only needs a gesture, a look, or a change in cadence to give us a brief look at the range and anger of this character. And He Who Remains is angry about what the other Kang variants did. After eons of ruling over the Sacred Timeline, He Who Remains is still mad at himself. And he’s terrified of what other Kangs can do to the multiverse.

We haven’t even seen Kang the Conqueror in action

Major further explained in the documentary that the way this Kang dresses reflects who he’s become. “He Who Remains has lived forever,” Majors said. “One of the great things I got to experience with our costume designer is that every piece we decided on was from a different place. The cape I had on was from the Victorian era. The shoes were from Genghis Khan. The pants from Mongolia, etc. You just mix and match it together, and it informs the character.”

The actor teased that we’ve only begun knowing Kang. And that what’s coming will be very different. “I think with He Who Remains, the objective for me was to give me the largest canvas possible. From that, as Kang begins to rear his head and do his deeds, in many ways, he has no choice but to be in opposition or be different from He Who Remains,” Majors said in the Assembled episode. “That was the thing that grabbed me and pulled me into the role. Kang lives in so many iterations as He Who Remains says: ‘Reincarnation, baby.'”

Bringing Kang so early in Phase 4 is a great move from Marvel; I said it before. We might get a lot more time with the big MCU villain than we did with Thanos in the Infinity Saga. For now, the only other project Majors is confirmed for is Ant-Man and the Wasp: Quantumania.