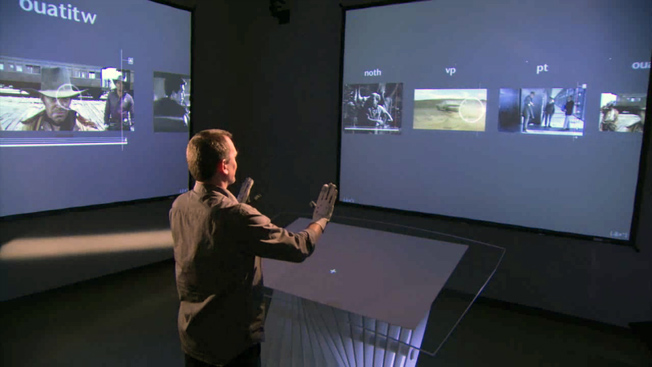 John Underkoffler is known for his imaginative vision for the future of computing, thanks in part to his work as a science advisor on the film “Minority Report.”

More than just special effects eye candy, though, the trippy, gesture-based user interface he cooked up for a few characters in that film is as good a place as any to start in understanding Underkoffler — as well as Oblong Industries, the L.A.-based company he leads as CEO; why it was able to land a $65 million investment in recent weeks to accelerate the growth of its core product, which enables immersive visual collaboration in the office; and why he thinks the computing experience dominated by a single keyboard and mouse is about as antiquated as an 8-track.

2017 is already shaping up to be a fascinating sort of tipping point year for computing. Think of the mass of new VR/AR headsets and devices coming onto the market and the potential for interesting social VR experiences. And companies like Loook, a Seattle-based holographic mixed reality design and development studio, that are working to push the envelope in terms of what holographic interfaces can do and become.

Anyone who had trouble getting their hands on an Amazon Echo device over holiday season — both the original Echo and the Dot were maddeningly hard to come by for most shoppers — may also intuitively understand this phenomenon. Amazon’s blockbuster smart home product builds the entirety of the user interaction around conversing with the device’s virtual assistant, Alexa. They’ve sold like hotcakes — and the screenless, voice-based devices point a way forward.

Underkoffler’s company plows similar ground in the workplace. He wants to introduce new gesture and touch-based inputs into the office a la Minority Report, and he’s adamant: this is where all of computing is probably headed.

“We’re coming out of 35 years of UI that’s only accidentally ever had a single mode of keyboard and mouse,” he tells BGR. “The truth is the future is going to be about multiplicity — a bunch of different ways of interacting that are all harmonious with each other through great UI design that allow you to either use the tool or modality you’re most comfortable with — or pick up the right utensil, as it were, that’s the right tool for the moment. I think we’re still early days in voice. I also think gesture is going to be one of those utensils that you’ll use when the work you need to do is inherently spatial.”

Yes, we’ve already started to move in this direction thanks to smartphones and tablets that move beyond keyboards and cursors. But even tapping app icons has already become so commonplace as to be almost passe.

Talk to Underkoffler enough, and one word he’ll mention repeatedly is “ubiquity.” It’s a vision of computing that’s everything we need, all the time.

“Our core product is mezzanine, and we’ve got a well-articulated 10-year roadmap for it,” he said about the offering, which helps transform work meetings into immersive screen-manipulation experiences.

He continues: “We’ve showed the world a new kind of computation — a new way of working that’s deliberately collaborative and is collaborative first. Rather than how people have been using computers for the last 35 years, which is very much in isolation.

You open up a laptop or use a smartphone or tablet, and its entire existence and the design of the whole UI supposes there’s only one person that matters, and that’s you. They’re designed for a sole person to use, and as a consequence they’re kind of isolation machines.”

People can undertake meaningful work and other collaborations “in spite of” such machines, Underkoffler says, not because of them. So what next?

Answer: ubiquity. Oblong’s CEO envisions taking his company’s core product beyond being encapsulated in a special room where you interact with it. He wants it to be “the experience that runs on and behind every set of pixels in the world.”

And is such a thing really that surprising? We’ve seen how tech companies have been racing to extend themselves into everything, everywhere. It’s why Google ventured into Echo territory; a certain iPhone maker has ambitions for the car; Facebook now owns a VR headset.

“The design challenges are also the things that get us the most excited,” Underkoffler says. “On a laptop, there’s a single cursor because only a single cursor is working at any one time. On Mezzanine, there’s any number of cursors for how many people are working in the session.

“As far as our roadmap for 2017, we’ve got some fantastic stuff coming out. There’ll be two major leaps forward on the product front.”

The company’s customers include IBM and NASA, which bought 10 Mezzanine systems and installed them at a handful of research sites around the country.

“Our stuff is now on six continents,” Underkoffler says. “We’ve got demo centers in 15 U.S. cities as well as London and Barcelona, and we’ll be opening one in Germany in a couple of months. It’s a great time, because the world is recognizing the need to solve the kinds of problems we’ve been solving all along. That we’re not going to make it through the 21st century unless we get collaboration down.”