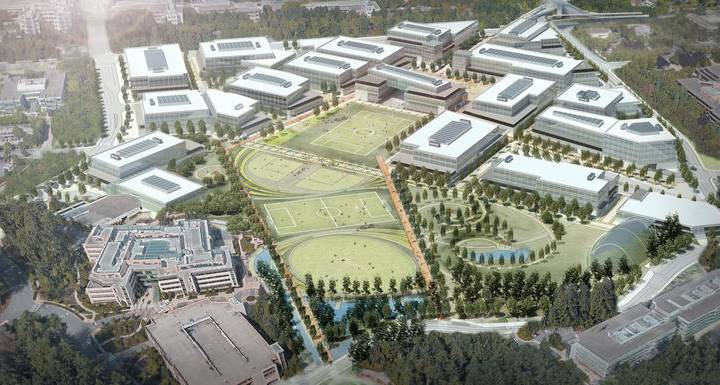 Microsoft has announced plans to radically overhaul its existing campus in Redmond, Washington, and replace it with a bigger and more modern HQ. With Apple’s new UFO campus just completed, and Amazon running a weird version of The Batchelorette where cities compete for a multi-billion-dollar headquarters, Microsoft was left feeling all left out.

Well, that’s all about to end. In a two-minute video, Microsoft lays out its plan to raze existing buildings, and completely overhaul the 500-acre space with 18 new buildings, jogging and walking trails, retail space, and even a cricket field.

The focus appears to be on friendly above-ground work and play space. All car parking will go underground, and in its place will spring up sports fields, a tree-lined boulevard, and a two-acre open plaza that can hold up to 12,000 people for events.

In total, the new campus will house the 47,000 employees who work at Microsoft’s existing Redmond campus, and add capacity for 8,000 more. The campus will be divided into “team neighborhoods,” which I imagine turns every single day into a corporate retreat team-building exercise. 12 buildings will be torn down and replaced with 18 new ones, bringing the campus to a total of 131 buildings. The effect, at least from the concept video, makes it look far more like a university campus than Apple’s new “Infinite Loop” campus, where all the focus is on one huge building.

Work is expected to take between five and seven years to complete, coinciding with the planned 2023 arrival of a light rail station for the campus.