Cable TV prices have been soaring for 20 years, which probably explains why everyone’s cutting the cord

Cable TV is undeniably expensive. With the average bundle sitting around $105, it costs substantially more than a cell plan and some people’s electricity. But it hasn’t always been this way: According to a new report from Kagan, prices have increased by 74% since 2000, even when accounting for inflation.

Over the same period of time, average wages have remained stagnant, meaning that cable companies are asking people to pay nearly double what they were 20 years ago for TV that seems to have twice as many reboots. No wonder everyone’s cutting the cable.

A multichannel TV package cost $60 per month in 2000 (adjusted to 2017 dollars), but the same package has risen to nearly $100 right now. As the chart shows, median wages have remained flat over that time period. It’s easy to see where the money goes: gross revenue for cable and other pay TV companies has risen by a steady 5.5% per year over that time period. 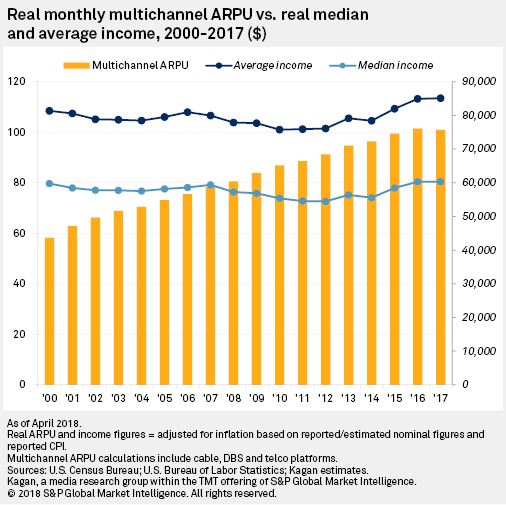 “The eroding legacy multichannel affordability partly explains the popularity of over-the-top services such as Netflix Inc. and Amazon.com Inc.’s Prime Video,” Kagan said in a statement.

Data backs up Kagan’s assumption. TiVo’s Q4 2017 video trend survey shows that among pay TV users, high prices was the most common cause of dissatisfaction, with 83% of unhappy users saying that price was to blame. Among cord-cutters, the numbers were even worse:

Though previously mentioned, it’s worth noting again that of those respondents cutting pay-TV service, 86.7% do so because of price, and this category increased by 6.6 percentage points y/y. As price drives both dissatisfaction and cord-cutting, these two results support the view that some respondents can’t justify the high price of cable/satellite service, especially with the availability of lower-cost options like Netflix and Hulu. Now that these services also offer original content, streaming also cuts into the daily viewing time of pay-TV services, potentially leading to a deterioration of perceived value. Pay-TV providers must act before consumers reach their tipping point.