Hearthstone is becoming increasingly cost-prohibitive, but Blizzard refuses to adapt 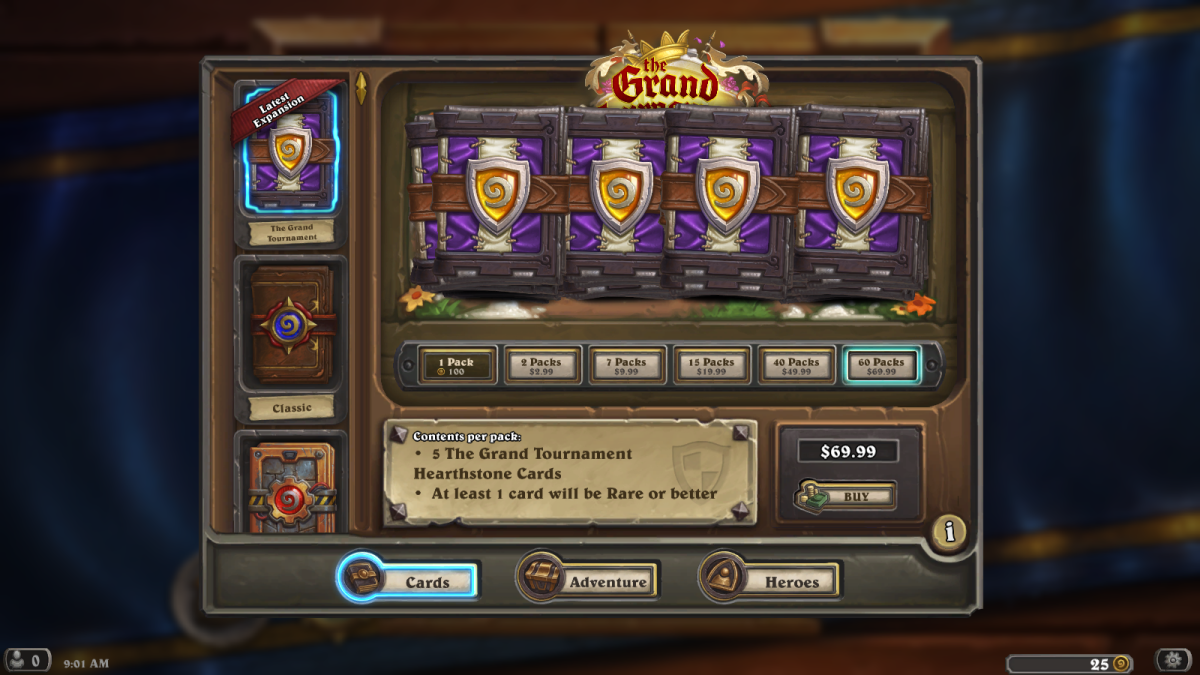 Hearthstone is one of my favorite games in years. I complete my daily quests every day of the week, I pore over upcoming cards when Blizzard (finally) announces a new adventure or expansion, and I check HearthPwn on a weekly basis to make sure my decks are up to snuff in an increasingly cutthroat meta.

But as I opened my 31 packs from The Grand Tournament expansion on Monday with the gold I’d been saving up for over two months, I couldn’t help but wonder why Blizzard refuses to give its always-growing player base a chance to catch up.

Along with Hearthstone, I also play SolForge, another digital collectable card game, on a fairly regular basis. It’s an incredibly deep and fun card battler, but the presentation is lacking and the community isn’t nearly as robust.

Still, I’m never as put out by the admittedly uncommunicative development team of SolForge as I am by the Hearthstone team, a group that seems to be working harder on crafting excuses for why it isn’t implementing new features into the game or addressing balance concerns than it is on simply taking care of business with the seemingly infinite resources provided by both parent company Activision and the reported $20 million in revenue the game brings in every month.

The biggest issue, and one that the Hearthstone team needs to explain sooner rather than later, is why they refuse to treat Hearthstone like a digital card game. At any given moment, a member of the team could go in and adjust a card’s statistics, making it a viable (or at the very least, a less terrible) choice in a competitive or arena deck.

But instead, we get Ice Rager and Evil Heckler, an unfortunate instance of “power creep” in a game that has done a relatively good job of avoiding that blunder in the past.

You have the tools to correct your mistakes, a luxury that the Magic: The Gathering designers would have killed for over a decade ago. Why not take advantage of those tools? I haven’t seen a single member of the often outspoken and occasionally defensive community put up a single argument against fixing broken cards, yet it has become increasingly uncommon in the months since the game launched.

Inevitably, there are going to be cards that fall out of favor as the meta shifts, but if a card has never been used to any effect in its entire existence, either phase it out or fiddle with it until it becomes viable.

Another huge issue that the team hasn’t addressed is the cost of entry for a new player. If you start playing today and want to be competitive within the next six months, you’re going to have no choice but to pay money to catch up. And not a small amount either. And that’s fine — Hearthstone isn’t a charity — but the lack of appreciation for a community that has made Hearthstone a behemoth in the genre and a massive financial success for Blizzard is just disheartening.

Every day I log into SolForge, I get a free pack. Free packs in Hearthstone come around about as frequently as free money in the real world. Blizzard is as stingy as it can be without completely alienating players.

And then they unintentional rub it in the faces of players who want to catch up (but might not be able to justify spending over $100 on a card game) by releasing character skins for $10 a pop. No one has a problem with the fact that the skins exist — they’re entirely optional and have no effect on gameplay — but we know the game isn’t struggling to stay online. Why not spend that time and those resources on features that players have been clamoring for?

This wasn’t a necessary addition to keep Hearthstone afloat. On the other hand, when a game like Rocket League (which thousands of PlayStation Plus subscribers received for free back in August) offers cosmetic DLC (at a much more reasonable price, by the way), players eat it up, because they feel like they’re helping to fund a game they enjoy, and one which hasn’t cost them anything but hard drive space.

The most frustrating part of this whole mess is that the things Blizzard needs to do to appease people like myself, who are increasingly turned off by the lack of communication, the infrequency of new content and aversion to change, seem simple to accomplish!

If the Hearthstone team put me in charge of the schedule for the next six months to a year, here’s what we would be working on:

From my point of view, which I genuinely believe is shared by many fans of the game, there’s a real disconnect between the development team and the community — a disconnect that is extremely easy to fix.

Would Hearthstone collapse if you gave players an additional free pack every now and again, just for fun? Would a free Arena run every week be catastrophic? Would someone on the art team get canned? Would Activision pull the plug? If so, then we’d at least understand why things have to be the way they are. But without any explanation, it’s becoming harder and harder to accept the status quo.