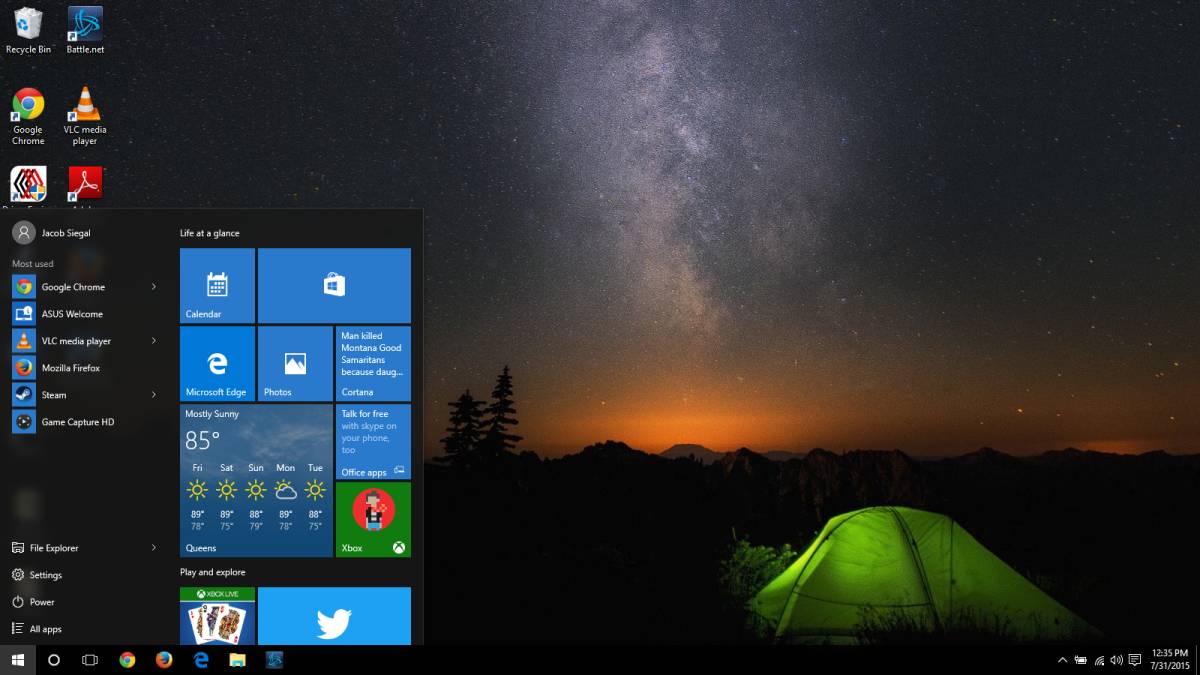 When I first upgraded to Windows 7 back in 2009, I was shocked. Microsoft had somehow recovered from the mediocrity of Windows Vista and built an operating system that felt like the natural progression from Windows XP. It was clean, it ran better and most importantly, it didn’t try to fix what wasn’t broken.

I was smart/fortunate enough to avoid Windows 8 altogether, but as a fan of new technology, I couldn’t help but feel a little left out. I wanted the latest and greatest, and now, nearly three years later, it has arrived in the form of Windows 10.

READ MORE: Windows 10 is spying on almost everything you do – here’s how to opt out

Having spent a full day with Windows 10, my first takeaway is that Windows 10 is a sequel to Windows 7 in the same way that 7 was a sequel to XP. All the best elements are still here — the Start menu, the taskbar, the easy-to-use File Explorer — but they’ve been altered just enough to warrant a full-scale upgrade.

“Just enough” might be the best way to describe Windows 10. It’s just enough of an update to make my aging laptop feel new again. The UI plays a huge part in this, as Microsoft has sharpened the look of its classic desktop interface once again.

Surprisingly, the first thing that stood out to me was not the new-and-improved Start menu, but rather the Action Center button in the taskbar. A holdover from Windows Phone, the Action Center is an incredibly useful way for Windows 10 to share notifications without bombarding the screen. Plus, having quick access to Wi-Fi connectivity, display brightness and the Settings menu is invaluable.

Once I was done fiddling with the Action Center, the Start menu immediately caught my eye. One of my biggest problems with Mac has always been its lack of a focal point. Windows float around the screen freely, the menus are overly simplistic — what I want from my computer is a true command center, a one-stop shop, and the Windows 10 Start menu provides that.

Yes, the apps look kind of wonky in alphabetical order and the default text size is worryingly tiny, but the simple fact that I can see the forecast and a few headlines from the Start menu is enough of an improvement for me to prefer this over Windows 7.

As for Microsoft Edge, one of the most anticipated components of Windows 10: it’s a perfectly serviceable browser — leaps and bounds better than any version of Internet Explorer — but it hasn’t given me any compelling reasons to ditch Chrome (in the admittedly very limited time I’ve spent with it). The ability to draw on webpages is neat, but utterly unessential, as is the share button. I plan on continuing to jump back and forth over the next week or so, but I can’t see myself making the switch.

The last feature that I had time to dig into was the Xbox app, which allows users to stream games from their Xbox One to the Windows 10 desktop. Halo: The Master Chief Collection was playable on my beastly four-year-old laptop, but laggy enough that I wouldn’t want to jump online and compete with other players. That said, the interoperability between Xbox and Windows is an incredibly exciting notion, and one I can’t wait to watch as it grows in scale.

There are still countless features and additions I haven’t had the opportunity to explore, but I can safely say that making the jump to Windows 10 was the right decision. It’s a smarter, cleaner Windows 7 without any of the baggage that made Windows 8 so unbearable.

GET WINDOWS 10: How to skip the queue and install Windows 10 right now