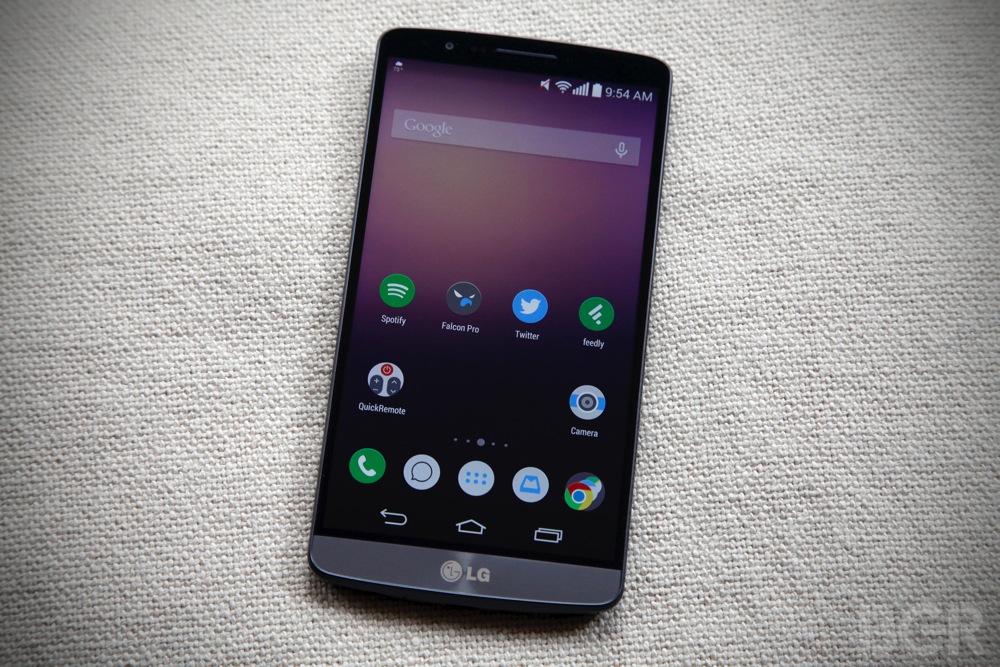 As I walked through Times Square on my way to the office one day last week, something odd caught my eye that made me do a double take. A sizable line had formed outside of the AT&T store as it prepared to open. I have seen people line up outside of that store before, of course, but typically only when a fresh batch of recently launched iPhones is waiting on the other side of the doors.

This time, however, people weren’t lining up to buy a new iPhone. They were lining up for the just-released LG G3.

And truth be told, this is a phone worth lining up for.

The G3 is LG’s latest flagship smartphone and it couldn’t come at a better time. HTC’s One (M8) launch has long passed and sales are reportedly slowing. Samsung’s Galaxy S5 failed to impress eager consumers and despite Samsung’s massive marketing budget, buyers don’t seem to be flocking to stores for the S5.

With about two months until Apple’s iPhone 6 is released, LG has a nice window of opportunity where, with some smart marketing, its new G3 can stand alone in the spotlight.

The phone’s key specs include a 2.5GHz quad-core Snapdragon 801 processor, 3GB of RAM, up to 32GB of storage, support for an additional 128GB of microSD storage, Android 4.4 KitKat, a 13-megapixel rear camera with Laser Auto Focus and Optical Image Stabilization, a 2.1-megapixel front-facing camera and a massive 3,000 mAh battery.

In my testing, the battery has easily carried me through a full day of usage with plenty of juice left the next morning.

Despite the phone’s laundry list of impressive specs, the real jewel in the G3’s crown might be the display.

While Samsung has traditionally been the clear leader in smartphone displays, the G3 has gone where Samsung has not yet been able to tread: It’s the first widely available smartphone with a quad HD (2K) display.

The phone’s massive screen measures 5.5 inches diagonally, putting it near the high end of the phablet range. Its design is fantastic, however, with barely any bezel on the sides of the display and minimal space above and below it.

The result is a phone that is surprisingly manageable for a device with such a large screen. It’s still very big and cannot always be used comfortably with one hand, but it’s not as bad as you might think when you see 5.5 inches on paper.

Images and text are unbelievably smooth on the G3’s screen. I was skeptical that my eyes would be able to pick up much of a difference between a full HD display and a quad HD panel, but it’s more apparent than you might think.

Colors are more vivid and vibrant on the Galaxy S5’s Super AMOLED screen. Whites are also brighter and blacks are deeper. The clarity is no match for LG’s G3 display however, and it might actually be my preference between the two displays.

Moving inside to the phone’s software, LG has done a nice job of adding value to Google’s Android 4.4 software without being overbearing, which is a complaint some people have of Samsung’s TouchWiz software.

Cutting through all the bloatware stuffed onto my AT&T review unit, LG’s Android apps feature minimalistic designs and bright colors. In fact, several apps look much like HTC’s preinstalled apps in the latest version of its Sense software, with bold, bright colors at the top of apps and simple but elegant designs beneath.

LG has also tossed in some unique features that really enhance the user experience.

For one thing, LG’s decision to move the power/sleep and volume buttons to the back of the handset gives the phone a fantastic look from the front, but they’re not terribly comfortable or convenient to use despite claims made in LG’s marketing.

To address this, the G3 includes “knock” gesture recognition that lets users wake the phone and put it to sleep simply by tapping twice on the screen. What’s more, the phone supports knock patterns to unlock it without having to enter a PIN or password.

Other nice feature additions include a terrific battery saver mode, wireless charging support out of the box and simple yet powerful camera software to support what is definitely one of the best smartphone cameras I’ve seen in recent history.

Focusing the G3’s 13-megapixel shooter is lightning fast thanks to laser-assisted focus, and it captures photos and videos that are very clear and vivid. Edges are nice and smooth, and color reproduction is also impressive. The camera features optical image stabilization as well, to help prevent blurring.

On the flip side, I only have two real complaints about the G3.

LG’s new flagship phone features a gorgeous, sleek design that is remarkably thin. It’s also quite solid and feels substantial in the hand.

Solid though it may be, however, it still feels plasticky and doesn’t even come close to comparing with a premium handset like the HTC One (M8) or iPhone 5s.

Also, this phone is big. Very big. It’s surprisingly compact for a handset with a 5.5-inch display, but it’s still a gigantic phone that measures 5.76 inches tall by 2.94 inches wide and 0.35 inches thick.

Average consumers will not be able to use this phone comfortably with one hand. If that’s a concern for you, it may be a deal breaker.

With the Galaxy S5, Samsung left the door wide open for rivals to step in and wow us with truly impressive phones. Simply put, Samsung’s latest flagship phone is boring. I said it the first time I laid eyes (and hands) on it, and I’m saying it again now.

Surprisingly, not one but two of Samsung’s rivals answered the call this year.

HTC’s latest hero phone, the One (M8), is gorgeous and powerful. There isn’t a phone on the planet that can match its sleek design and gorgeous metal housing. Sadly, however, one smartphone can only do so much to help a company turn things around, and HTC is still in trouble.

Now, LG has answered the call as well. The LG G3 isn’t just marginally better than the Galaxy S5, it’s better in almost every way.

The G3 is powerful and smooth, with cutting-edge specs and surprisingly nice software additions on top of Android KitKat. It also sports a ridiculously sleek design and a gigantic display that is currently in a class by itself.

If you’re in the market for a new smartphone, you would be doing yourself a great disservice by not considering LG’s G3.