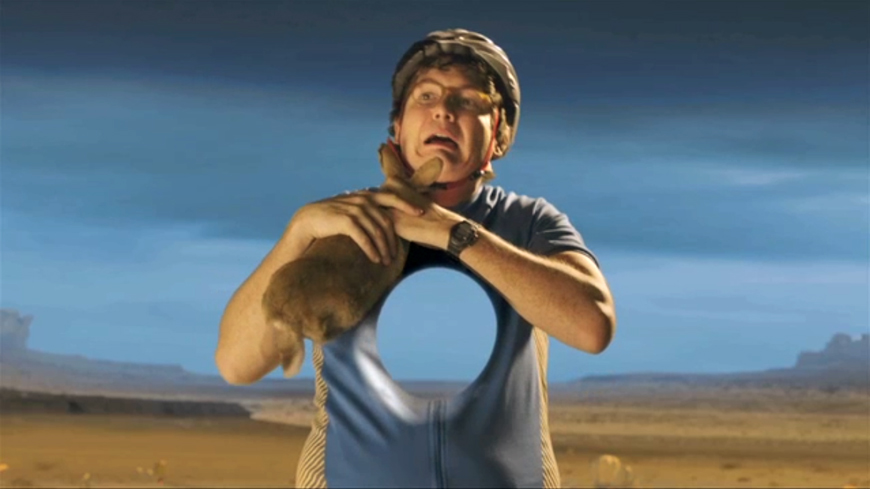 Are you a cable TV subscriber who might be considering cutting the cord? Did you already take the leap and dump your TV service? Cable TV doesn’t want to see you go, and it wants you back if you’ve already left. And what better way to convey that message than with a nice little campaign put together by the National Cable and Telecommunications Association, the main trade association for cable operators in the U.S.

Ads currently running on various websites (see disclosure below) carry the tag line “Life without cable leaves a mighty big hole.” Clicking through takes you to The Hole Saga website, where you can watch four short marketing films brought to you by the NCTA.

The premise of each short is as follows: a person finds him or herself in a precarious or otherwise undesirable situation. Just as things are about to go bad, the video stops and the viewer is asked to do one of two things: “Give ’em cable” or “Cut ’em loose.”

Choose to give the protagonist cable and a tablet, presumably connected to a high-speed wireless network provided by a cable carrier, somehow appears. The information gleaned from whatever website or video happens to be displayed on the tablet inevitably saves the day.

Choose instead to “cut ’em loose,” and disaster strikes.

In the first video, a man with a gaping hole in his chest (get it?) is bicycling on a road through the desert when he happens upon a little bunny he believes to be in need of his help. He gets off of his bicycle and approaches the seemingly cute and friendly rabbit. Upon closer inspection, we see that the rabbit actually has glowing red eyes and sharp, jagged teeth. The man doesn’t seem to care.

Then, the all too important question is asked: “Give ’em cable” or “Cut ’em loose?”

The cable cutter continues to embrace the bunny, and offers the small creature a ride on his bicycle. The rabbit then leaps up and latches on to the man’s neck, biting down and continuing to hold on despite the man’s struggles.

“And because he didn’t get the news,” a tablet tethered to a cactus reveals, “he didn’t know mutant bunnies were on the loose.”

Of course had you given the poor guy cable, disaster would have been averted. The tablet tethered to the cactus would have been revealed in time and it would have been streaming a breaking newscast informing the man that mutant bunnies escaped from a nearby lab. He would know, then, to put on a falconry glove and tame the mutant beast before taking it for a ride on his bike.

And that gaping hole in his chest… would have been filled.

To close out the video, the tag line appears: “This has been a cable connection.”

A link to the NCTA’s The Hole Saga campaign can be found below in our source section.

DISCLOSURE: I found this marketing campaign when I noticed it being advertised in a remnant ad here on BGR served by Google’s AdSense network. This article is in no way related to that or any other campaign. Any referral information from the URL as linked by that ad, which may or may not appear again on this site, has been stripped from the links to the NCTA’s site both above and below.