You Say Gibi and I Say Giga 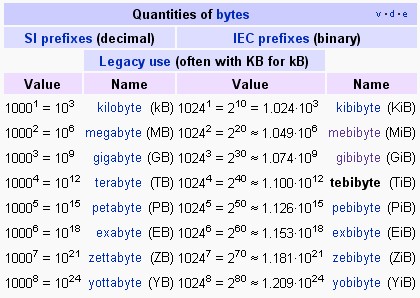 You say Gibi, and I say Giga, you say Tebi and I say Tera. Let’s call the whole thing off….

Say someone goes around telling you that a certain part of them is a certain size. Then what is going to happen when they finally show it off, and it turns out to be considerably smaller than what you expected? Do they 1.) Get extremely embarrassed, because you called them on it, or 2.) Argue the size they told you was correct, but it’s the measuring system that is wrong.

Guys, take a lesson, there is only one right answer – and its no.2. At least that’s the case, when you’re in the data storage industry.

For some time buying a storage unit of a certain amount of gigabytes, meant coming home to find out that your computer was telling you, you had around 10% fewer gigabytes than it said on the box. This has irritated us, but it irritated a group of people in California enough to seek justice in the court.

So the industry made a move that would make any used car salesman proud; they tried to explain that those gigs were missing on purpose, since all of us and our computers were just using the wrong measurement. See inside a computer a terrabyte is 1,099,511,627,776 bytes, because it’s binary. But inside a cardboard box that you find on a shelf in a computer store, a terrabyte is 1,000,000,000,000 bytes, because it’s decimal. Now when you take the content out of the cardboard box and put it inside you computer, presto, it tells you that you have around 900 gigabytes available. And that’s because you’re an idiot. You should have bought a tebibyte, if you wanted a terabyte for your computer. How does that not make sense?

Well, the court in California is just old men in robes, and apparently they aren’t hip and down with it, like the industry. So the lawyers huddled and cuddled, until they decided on a settlement paying some of the litigating customers a 5% refund, and all of them a 10% discount for the respective online stores. All because those dumb customers had bought their hardware under the pretext that 1 gigabyte = 1 gigabyte. An appeal of that settlement has now been rejected, and it seems to be the end of the case for good.