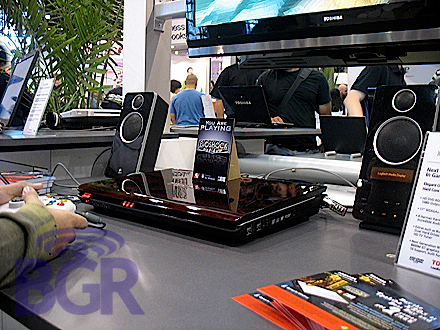 There are a ton of new and exciting products here at Digital Life, but the overwhelming focus clearly seems to be on gaming. Toshiba’s entry into the mobile gaming market is a pretty solid one. Their Toshiba Satellite X205 SLI Ultimate Gaming Console is very elegant looking and it still brings some serious 1-2 gaming punching power to the table. It’s a laptop (but we don’t recommend toting one of these beasts around) that sports a number of impressive features. For starters, it rocks an HD-DVD ROM drive with an HDMI output to enjoy your favorite Hi-Def movies and games on an external display or HDTV. The graphics card…impressive! It s an NVIDIA SLI Dual GeForce 8600M GT card with 512MB of on board RAM and native DirectX 10 support. At the booth, Toshiba actually had this laptop hooked up to an external TV and we were extremely pleased with the resolution, clarity, and frame-rate we saw. If you’re not privileged enough to have an HDTV worthy of displaying greatness, it really isn’t a big deal. Your picture on the actual laptop will look great thanks to a 17″ WSXVGA+ TruBrite display. You’ve also got not two, but four Harmon/Kardon speakers on here to bring the bass and thunder, a built-in web cam, fingerprint scanner so your roommate can’t play Command and Conquerer when you’re not there, and an external HDTV tuner to finish things off. Not bad at all, guys! While Toshiba was mum on pricing, it seems as if the Satellite X205 SLI Ultimate Gaming Console is already available from a number of online retailers, including Best Buy for a little less than $2,000. One more shot after the break!