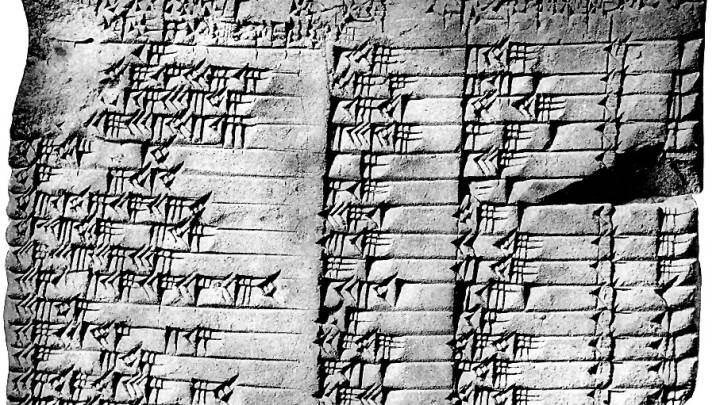 Thankfully, very few of us have to bother with trigonometry on a daily basis, but regardless of how much you may have dreaded studying it (or any math, for that matter) in school, it’s still fundamental to our modern understanding of measurements. Hipparchus, a Greek mathematician and astronomer whose work dates to between 160 and 120 BC, is credited as the father of trigonometry, but a nearly 4,000-year-old stone tablet may be about to totally rewrite the history books.

The tablet, which is called Plimpton 322, was recovered in modern day Iraq roughly a hundred years ago. It’s a mathematical table that is thought to have been written somewhere around 1800 BC, and it’s one of the very earliest examples of Babylonian mathematics. In a new research effort led by a team from the University of New South Wales, the tablet is being hailed as one of the very first examples of trigonometric calculations. The group’s research was published in the journal Historia Mathematica.

“We trace the origins of trigonometry to the Old Babylonian era, between the 19th and 16th centuries B.C.E,” the paper explains. “This is well over a millennium before Hipparchus is said to have fathered the subject with his ‘table of chords’.”

The tablet is undoubtedly an extremely important artifact, but it has a problem: it’s not complete. The tablet is only a piece of what is thought to have been a much larger table containing over twice the number of rows and several more columns.

From what remains, the researchers have dubbed it one of the most accurate trigonometric tables ever, thanks to its reliance on ratio-based measurements instead of angles, but others aren’t convinced.

Duncan Melville, a professor of mathematics at St. Lawrence University, told National Geographic that it’s hard to determine the tablet is really based on trigonometric at all.

“Apart from the column headings, the tablet just consists of columns of numbers, and this invites a great deal of purely mathematical speculation,” Melville told National Geographic. “Some of the different interpretations for construction of the tablet are mathematically equivalent and so just having the output on the tablet does not tell you much about the process used to generate that output.”