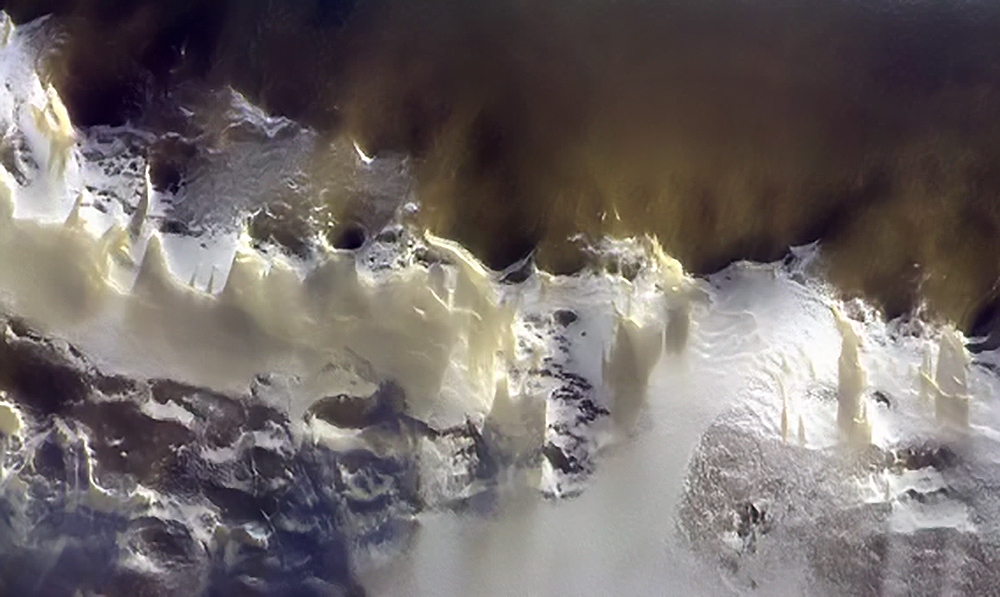 The European Space Agency’s fancy new Mars orbiter only arrived at the Red Planet a few weeks ago, but it’s already delivering some really fantastic eye candy of the Martian surface. The Trace Gas Orbiter (or TGO for short) is currently orbiting the planet at an altitude of just 250 miles, which means it has a great view of the planet’s surface, and it’s just delivered its very first photo to its handlers back on Earth.

The photo shows the frosty edges of the Korolev Crater on the north of Mars. The image was captured using the Color & Stereo Surface Imaging System (CaSSIS) tool, and while this first photo was merely a test of the system to ensure that it’s functioning properly, it’s already generating a lot of excitement amongst researchers.

“We were really pleased to see how good this picture was given the lighting conditions,” Antoine Pommerol, a member of the CaSSIS science team, explained in a statement. “It shows that CaSSIS can make a major contribution to studies of the carbon dioxide and water cycles on Mars.”

The full image is much larger than the one you see above, and it’s incredibly long and narrow. You can check out the full resolution here, but the icy crater is obviously the star of this particular shot.

But the TGO’s primary mission isn’t to take pictures; ESA equipped the spacecraft with some advanced sensors including two spectrometer systems and a “neutron detector,” all of which will help researchers get a better idea of what the Martian atmosphere is made of. The systems are designed to detect the chemical makeup of the gasses that surround the barren planet, and scientists hope it may even detect something like methane, which could hint that biological processes are active, or were active, on or within the planet.

The Trace Gas Orbiter has a long road ahead of it, with a total planned mission of roughly seven years. Its roughly two-year journey to Mars was a success, and now the real fun for scientists begins. You can expect to hear a lot more about its findings in the coming months and years.