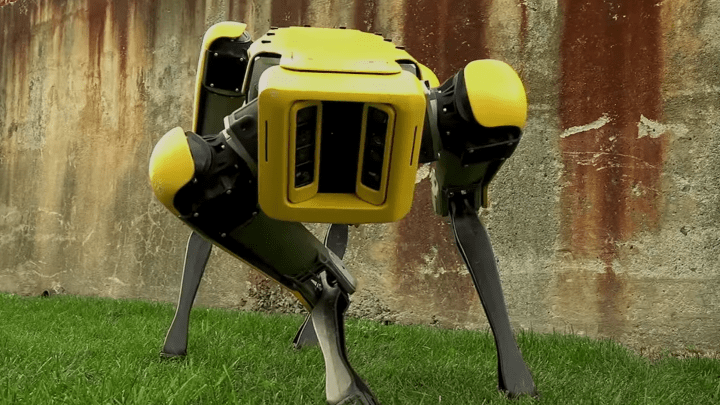 When it comes to creepy robots, it’s impossible to compete with Boston Dynamics. The company, which was famously bought then sold by Google, has always had a knack for making bots with unsettlingly realistic movements, and it just teased its latest creation which most certainly continues the trend.

The newly redesigned SpotMini robot “dog” is a lot like previous Boston Dynamics creations in that it walks on four sturdy legs and has an unusual prancing style of locomotion. It’s also kind of adorable, in a dystopian future sort of way. Just check it out for yourself.

In the extremely brief teaser clip, the SpotMini dances up towards the camera, stops and examines the person holding it, and then juts off as though it has much better things to do.

The robot is equal parts cool, impressive, and creepy, and even though Boston Dynamics is teasing it as “coming soon,” there’a already a lot we can figure out based on the brief video. For starters, the bot is significantly smaller and more streamlined than most of the company’s past quadruped creations, trading in a bulky, cumbersome body for a sleek, rounded rectangular shape that looks closer to a mainstream product than anything before it.

It’s a much more polished machine than we’re used to seeing from Boston Dynamics, which could be a sign that the company is actual poised to launch it as a product, which is incredibly exciting. With the recent purchase of Boston Dynamics from Google’s Alphabet by tech giant SoftBank, the pressure might be mounting to finally get some green flowing in rather than constantly flowing out.

In any case, we’re excited to see more of the bot in the near future, and if the company does indeed see a market for such a high-tech creature, it’ll be mighty interesting to see how they take to the real world.