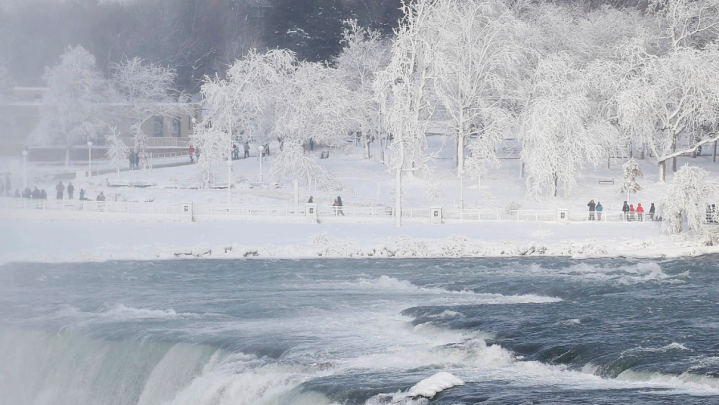 Niagara Falls is an incredibly popular tourist destination for one reason and one reason alone: it’s neat to look at. The falls are a sight to behold no matter what season you choose to visit, but anyone within driving distance is in for a real treat right now. The chilly temperatures which have gripped the northeast over the past week have resulted in a gorgeous spectacle, with thousands of drippy icicles and frosted trees surrounding the falls.

The entire area around the falls has taken on an otherworldly appearance. Everything is coated in a layer of shiny ice thanks to the snowy mist produced by the constantly tumbling water, and photographers are having an absolute field day.

Temperatures in the Niagara Falls area have been well below freezing for a while now, even dipping below zero (with much colder wind chills), and while it doesn’t make for very good t-shirt weather, it does produce some eye-catching vistas.

It's cold at #NiagaraFalls but that's exactly what makes it so magical. Ice covers everything, even the snow on the ground. See my photo gallery. https://t.co/hBqLxPFsNe pic.twitter.com/vGR0zaml0l

It’s important to note that the falls aren’t actually frozen, so some over-the-top claims of the water being “frozen solid” is little more than hyperbole. The sheer amount of water moving through the area usually prevents it from being frozen over, even in the incredibly cold winter of 2014, but as Snopes explains, the falls did come to a near-halt in early 1848. During that incident, the falls almost completely stopped, with ice build up reducing the flow of water to just a small fraction of what it normally is.

This not painting it's real picture of Niagara falls now in winter cold pic.twitter.com/6NA4e9LsSm

The current conditions are nothing like they were in 1848, however, and the falls are still flowing quite well despite ice buildup accumulating on every inch of rock and vegetation nearby. Located along the border between New York state and Canada, the area regularly sees freezing temperatures, but photographers don’t always get such an opportunity to capture the spectacle with such clarity.

The area is expected to endure temperatures below freezing for the foreseeable future, with the forecast not reaching above 32 degrees Fahrenheit until early next week. As the ice continues to build, photos of the falls will surely get even better in the coming days, so be sure to keep your eyes peeled on Twitter and Facebook for those sharing the view.