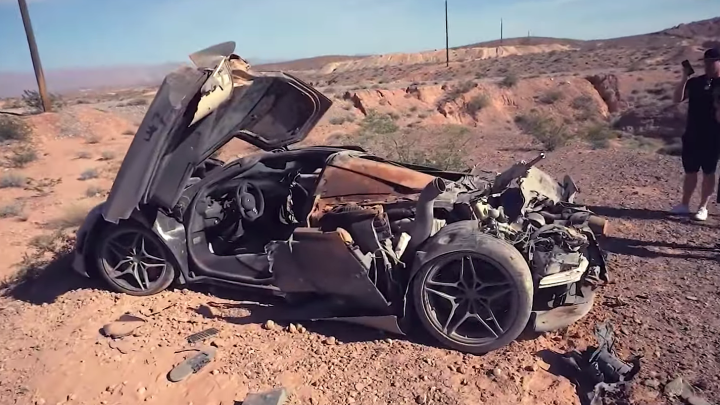 Finding an abandoned, broken-down car on the side of US road isn’t exactly out of the ordinary, but when that car is a $300,000 exotic supercar that has been completed destroyed in a high-speed crash, that’s quite a bit more rare. That’s exactly what Nevada police had to deal with when they came upon a totaled McLaren 720S lying dead on the side of a desert road. The driver of the vehicle, which had clearly been in a rollover crash and had sustained incredible damage, was nowhere to be found.

After canvasing local hospitals, law enforcement discovered that the driver and passenger (who were wearing their seatbelts at the time of the crash) had made it out alive with only minor injuries.

The details of how the car came to be crashed and abandoned in the desert are scant, but the driver and their passenger were reportedly participating in a Corsa Rally supercar event. These events take groups of supercar owners on long trips across many states, and while its organizers always insist that the events aren’t designed to be races, it’s not exactly uncommon for drivers to push the limits of their high-end rides.

As documented by DailyDrivenExotics, the rally came to a bit of a halt when the drivers realized that one of their brethren had been involved in such a serious crash. When looking at the condition of the vehicle it’s hard to believe that its occupants walked away. It seems the McLaren’s carbon fiber construction and structural supports saved the day.

Several McLarens were participating in the rally and Jalopnik did a bit of digging to see if they could figure out which particular vehicle and driver ended up in such a precarious situation. Based on the paint jobs and wheels not matching any of the cars they found, it doesn’t appear as though the McLaren involved in the crash had participated in much showboating on Instagram or elsewhere.

It’s certainly great news that the driver and passenger made it out with their lives, but we’ll reserve judgement on whether they deserve such a powerful automobile until after the police determine what factors contributed to the crash.