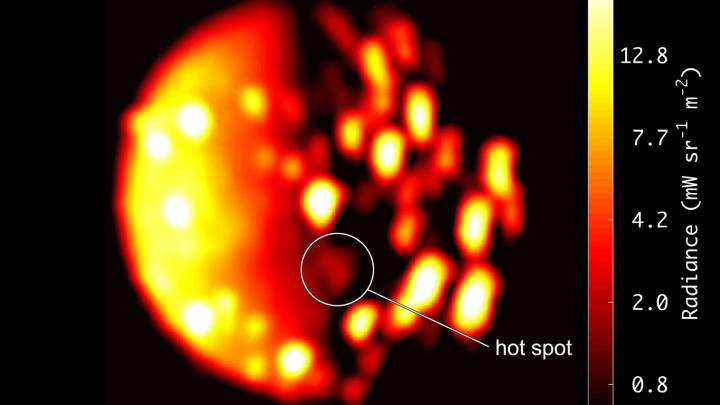 Jupiter might be the largest, most eye-catching planet in our Solar System, but the planet itself isn’t the only interesting thing in its neighborhood. Jupiter’s moon are also a huge point of interest for scientists, and Io is one of the most bizarre. Io is similar in size to Earth’s moon, but it’s a much more active place. Its surface is dotted with incredibly active volcanoes, and astronomers studying Io might have just spotted yet another one.

Thanks to NASA’s Juno spacecraft scientists have been able to get a better look at Jupiter and its natural satellites than ever before, and when the orbiter’s Jovian InfraRed Auroral Mapper (JIRAM for short) set its sights on Io, it saw something new.

“The new Io hotspot JIRAM picked up is about 200 miles (300 kilometers) from the nearest previously mapped hotspot,” Juno co-investigator Alessandro Mura, from the National Institute for Astrophysics, explains. “We are not ruling out movement or modification of a previously discovered hot spot, but it is difficult to imagine one could travel such a distance and still be considered the same feature.”

The hotspot, seen in the image above, isn’t quite as dominant as other well-known volcanic areas of the planet, but the signal is clear enough that scientists know something is going on there. Volcanic features on a world as active as Io can move and shift, forming new volcanos and fissures over time. Scientists already know of at least 150 active volcanos on its surface, but they have long suspected that there are still hundreds of potentially active volcanos on the moon which are waiting to be found. This new hotspot may be one of them.

The data used for this discovery was originally gathered back in December of 2017, but this isn’t the last time that Juno will be making observations of Io. The orbiter will be making “even closer” passes of the striking alien moon in the future, so we might be on the verge of discovering additional features of its surface.