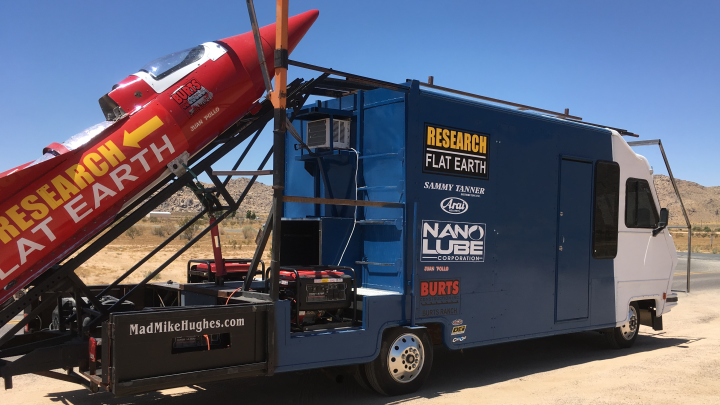 The man whose plan to launch himself in a homemade rocket to draw more attention to the round earth “conspiracy” went viral has now announced that the launch is cancelled. Mike Hughes, a limo driver and stuntman who is no stranger to amateur rocket launches, revealed via a YouTube video that his launch plans have hit a couple of pretty serious snags.

It seems that in all his preparation for the event, Hughes failed to actually get written permission confirming that he was allowed to launch the rocket. Yes, it turns out that launching yourself a mile into the air in a rocket you built in your driveway requires a permit or two. Oops.

Hughes claims that he contacted the local Bureau of Land Management for permission to launch the rocket over a deserted patch of public land near Amboy, California, and was told that it would be left up to the FAA. Now, local officials say they never heard from Hughes, and he most certainly was never given a permit for such an event. Hughes also notes that the FAA never would have permitted the launch anyway.

Oh, and on top of all that, the rocket launcher — which is a repurposed motorhome, apparently — broke down when they were about to transport it to the original launch site. Hughes says a few hours of work got the launcher back on its feet, but overcoming the law is a bit more difficult. “It’s not easy because it’s not supposed to be easy,” the would-be rocket man says.

Now, Hughes says he plans to use a new patch of land that is privately owned, and that he’s already scouted out the launch site on Google Earth. The new (extremely tentative) plan for the launch is slated for this week, though the exact date and time have yet to be determined.

The 61-year-old stuntman, who “doesn’t believe in science,” is still unwavering in his desire to fly skyward, so it seems like the launch will indeed happen sooner or later. Whether he finds what he’s looking for up there — and lives to tell the tale — remains to be seen.