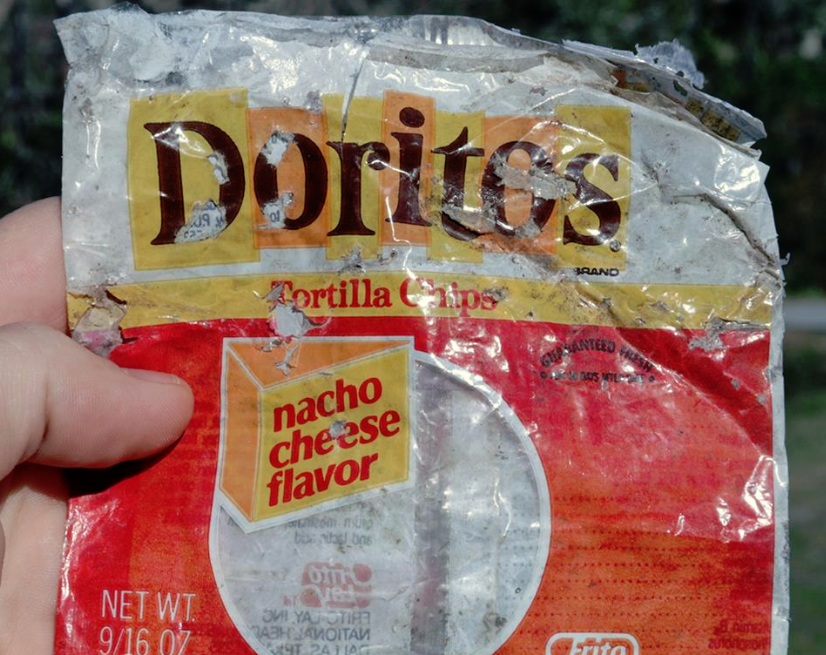 You probably never spare a thought for your trash once you haul your bin to the curb and it’s whisked away to a  dump where nobody ever has to look at it, but not all garbage ends up where it’s supposed to. As humans, we do a terrible job of keeping the Earth clean, and we’ve been littering for a long, long time.

A great reminder of that sad fact is this decades-old Doritos bag which was recently found washed ashore off the coast of North Carolina. At some point, likely several decades ago, this thin plastic container found its way into the ocean, and aside from some faded colors and a few holes it’s in remarkable shape.

The bag was discovered by National Park Service employees on the shore, and the logo on the bag along the the trademark helped them identify it as being from the late 1970s.

Plastic lasts a long, long time under just about any conditions — that’s why it’s so incredibly harmful when thrown away with no regard — but some questions about this particular find remain.

Plastic is certainly tough, but if this bag had been floating around in the ocean for four decades you’d expect it to be at least a bit more mangled. Some have suggested that the bag had spent the bulk of its life elsewhere before ending up in the ocean more recently, but that’s impossible to trace.

Others have questioned whether the bag really is as old as it seems. Doritos does do “throwback” designs for its bags on occasion, but while you can get a retro-styled Doritos bag in the “taco” flavor, no nacho cheese Doritos are offered in bags like this one.

Whatever its origins, it’s a timely reminder that we need to do a better job of cleaning up after ourselves if we don’t want the Earth to turn into one big dump.