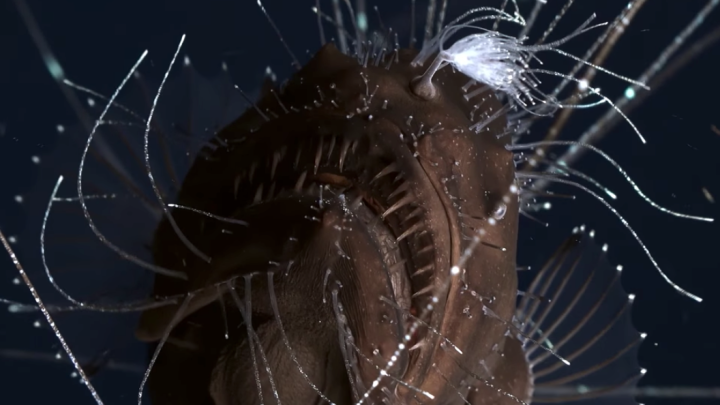 Anglerfish are one of the more well-known curiosities of the deep. They look incredibly odd compared to the fish we’re used to seeing closer to the surface, and their glowing appendages are truly a wonder of nature. Still, despite being studied for over a century, researchers were still largely in the dark when it came to the creatures’ mating habits. That is, until a husband/wife team of deep-sea explorers stumbled upon a pair of the fish in the throes of passion.

Well, maybe that’s overselling it a bit, because it appears to be a rather one-sided affair. A female anglerfish — the larger specimens with flashy “bait” appendages and bulky bodies — was observed being courted by her male suitor, who is just a fraction of her size. Oh, and the male was essentially being absorbed into the female’s body. Nature is weird!

In the video, which was captured near the Azores islands of Portugal, the large female can be seen with countless illuminated stalks surrounding her. This on its own was a completely new observation, as science had never known that the creatures were capable of such extravagant bioluminescent displays, but the real story is the tiny fish attached to her underside.

You have to squint to see it, but that tiny little blob poking out of the female’s belly is actually the male of the species. In the grand scheme of things he serves just one purpose, which is to find a female and deliver his genetic material. He does this by latching on permanently. Once attached, he fertilizes the female while at the same time being absorbed into her body, fusing with his mate and becoming a part of the larger female’s circulatory system. Once attached, the male no longer eats, but instead gains sustenance from the female’s own bloodstream.

In the past, scientists had found dead females with males still attached, but never had a mating pair ever been observed in the wild. “I’ve been studying these [animals] for most of my life and I’ve never seen anything like it,” Ted Pietsch, a researcher with the University of Washington at Seattle, told Science. “So you can see how rare and important this discovery is. It was really a shocker for me.”