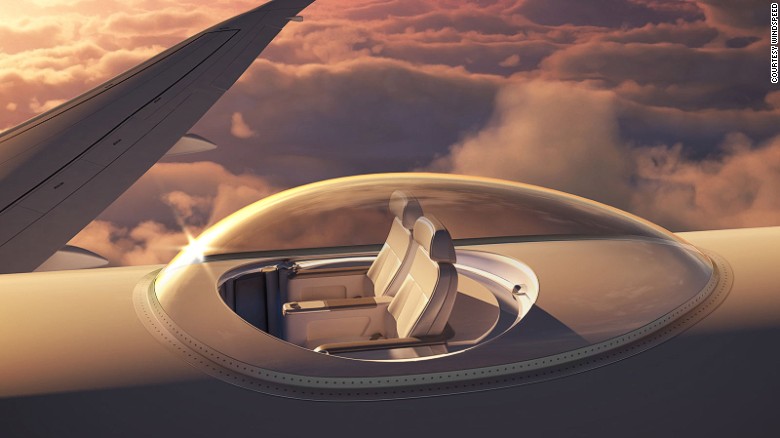 The seats in the image above might be the best you’ll ever get to buy on an airplane, even better than first-class seats. However, it’s not clear whether such a commercial aircraft will ever be built.

A new design patent reveals a seating system in which passengers looking to get a better view of the sky would get to sit on top of the plane. U.S. aerospace tech company Windspeed came up with the SkyDeck design concept, CNN reports, and the seat system could be installed on a variety of jets, from private models to commercial ones.

The passengers would access the top of the plane either with the help of an elevator system, as shown in the videos below, or using stairs. The seats would rotate 360 degrees, offering passengers a complete view of the skies.

“Current in-flight entertainment offerings have not changed much over the decades,” Windspeed said. “We wanted to come up with a product that would provide a higher level of entertainment to reduce the boredom of long flights.”

The company expects such seating options to “create the next exciting experiential in-flight entertainment for VIP aircraft,” though there’s no indication what company would actually use such a design.

SkyDeck’s patent is pending and has yet to be tested in the wild, but the company says the design is viable and won’t interfere with the aircraft’s handling. The canopy would be made of materials used in supersonic fighter jets that can withstand impacts with birds and other stress factors.

As for aerodynamics, the canopy will have a teardrop shape to reduce drag.