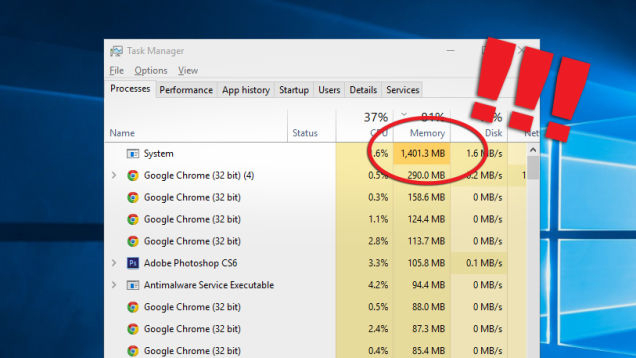 Microsoft’s Windows 10 is already installed on tens of millions of computers, but the free upgrade isn’t hassle-free. There are various issues and bugs that Microsoft has either fixed or needs to address in following updates, and then there are privacy worries that come with the free operating system upgrade. One particular problem for existing Windows 10 users appears to be the System process that can eat a lot of RAM. Luckily, this isn’t a bug, but a new feature of Windows 10 that should improve your overall experience. However, there are ways of fixing this issue if you’re worried about it.

The System process can take up more than 1GB of RAM, LifeHacker notes, which is a lot more than you’d want to see in there.

Nonetheless, Windows 10 handles memory management better than previous versions of Windows. Rather than using a pagefile system like before – writing data to the hard drive for later retrieval when running out of RAM – Windows 10 now compresses old pages of memory so they take up less space, but keeps them in memory.

This feature lets the OS pull app data out of memory faster than the previous pagefile system. The drawback is that the System process will take up more and more RAM between reboots and that it might use more CPU cycles for the compressing and decompressing jobs.

That means you don’t have to do anything about preventing it from using that much RAM – it just means the apps and tabs you have open will be available even faster.

However, there are things to do to make sure your Windows 10 performance isn’t affected. You can add more RAM, so that Windows 10 doesn’t have to compress pagefiles for opened apps, you can uninstall junk apps that you don’t really need, and you can close apps and tabs you don’t need.