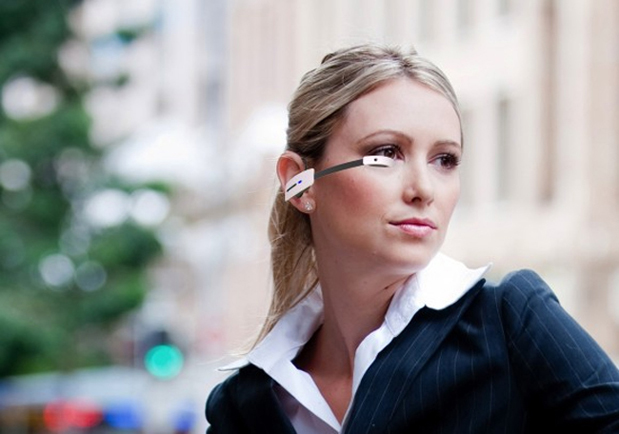 Google (GOOG) shook up the tech world when it revealed it was planning to release its augmented reality Project Glass eyewear. It sounded like an incredible piece of sci-fi tech would soon be in the hands of most consumers until the company announced the developer version would cost $1,500 and that consumers won’t be able to get one until 2014. Video eyewear maker Vuzix sees an opportunity here and is planning to release the “Smart Glasses M100” by mid-2013 for $1,000. In terms of design, the M100 resembles a Bluetooth headset more than it does a pair of glasses and features a 16:9 WQVGA-resolution projector that projects a four-inch display as if it were 14 inches away from your face. It’s got a a OMAP4430 at 1GHz processor, 1GB of RAM, 4GB of internal storage and runs on Android 4.0 Ice Cream Sandwich.

Its camera can shoot 720p HD video and there’s a gyroscope, accelerometer and integrated compass for accurate head-tracking features. On the audio side, the M100 has an earpiece and a noise-canceling microphone. Also included are Bluetooth, Wi-Fi 802.11b/g/n and a microSD card slot.