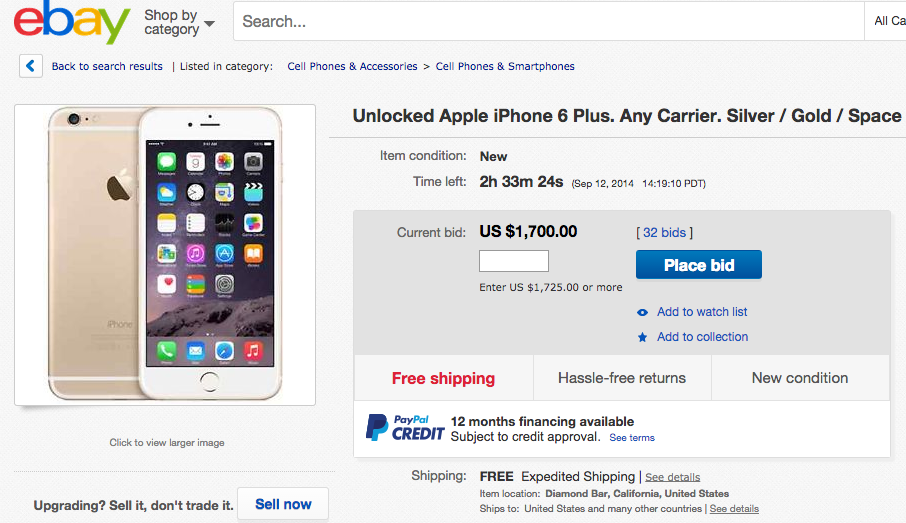 It’s way too late for you to place your preorder for the iPhone 6 Plus… but that doesn’t mean you can’t pay for someone else to grab one for you at a high premium on eBay. A quick search for the iPhone 6 Plus on eBay shows that the device is now fetching bids for as high as $1,700, or more than $750 higher than the $950 price you’ll pay for the off-contract 128GB iPhone 6 Plus.

The seller who is fetching the highest bids so far is offering the iPhone 6 Plus in all different colors — silver, gold and space gray — and in all different storage options available. The seller has so far received 32 different bids for the device, with the highest bid topping out at $1,700 with just over two hours to go in the auction. The seller says they will pick up the device next week by “camping out with several employees up to a week in advance in order to obtain multiple copies of the Apple iPhone 6 Plus.”

We understand that there’s incredible excitement for the iPhone 6 Plus, but it really might not be wise to shell out this insane kind of money for a phone that will be much more widely available at a significantly lower price later in the year. That said, if you just need to have an iPhone with a huge 5.5-inch display right this instance, then you’re probably more than willing to pay this kind of cash.