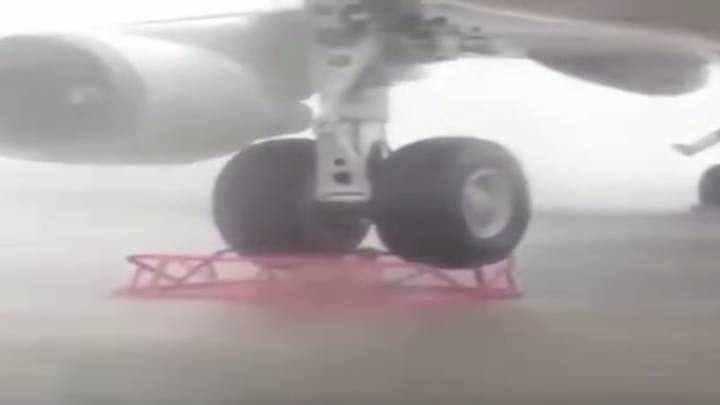 A monstrous typhoon hit Taiwan and coastal China over the weekend, with winds blowing at speeds of up to 180 miles per hour over the ocean. Once it hit land, the storm turned into a tropical storm, but the wind was still strong enough to be able to lift a giant Boeing 747 off the ground.

A video showing Mother Nature’s power follows below. The airplane weighs around 170 tons empty, Jalopnik reports, but that’s wasn’t heavy enough to top Typhoon Soudelor from pushing it around. The 747 is tethered to the ground, so you’ll see it gracefully bounce back after being lifted several inches from the ground without sustaining any damage. But the wind’s force is still terrifyingly impressive, creating enough force underneath the plane to lift it in the air.

A second video shows the eye of the storm as captured by the crew of the International Space Station. The typhoon was the strongest storm of the year so far, beating the nine typhoons that already hit the western Pacific this year.