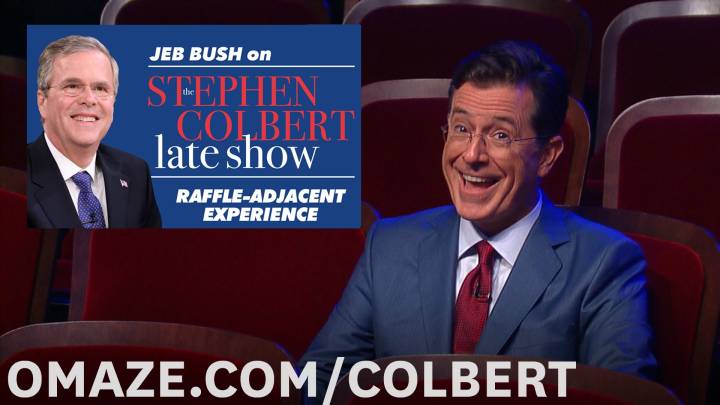 The last thing I’d want to do before appearing on the debut episode of a talk show is make the host angry with me, but that’s exactly what Jeb Bush did this week when he announced a contest to fly one lucky campaign contributor out to New York to see The Late Show with Stephen Colbert. Sounds reasonable enough — so why is Stephen Colbert unhappy?

Bush never consulted him about the contest.

READ MORE: How to see what Facebook knows about you based on your ‘Likes’

Earlier this week, Bush supporters received an email from the campaign about the contest. In order to be eligible for the grand prize, all you have to do is donate $3 or more to the Bush campaign. Winners will get to see the show in New York and will be taken out to dinner with New York Jets owner Woody Johnson, who also happens to be Bush’s national finance co-chair.

The fact that Bush was using The Late Show as a platform to raise money for his own campaign rubbed Colbert the wrong way, so the freshly-shaven host decided to issue a response:

That’s right — Colbert launched his own contest. You can contribute $3 or more on Colbert’s Omaze page to win VIP tickets to the show, just like Jeb’s, but if you win Colbert’s contest, you also get to submit a “non-obscene” question for Colbert to ask Governer Bush when the first episode airs on September 8th.

Best of all, every penny donated to Colbert’s competition goes to the Yellow Ribbon Foundation in support of injured service members.

Realizing he wasn’t going to win a battle of wits with a beloved comedian, Bush sent out this Tweet last night:

.@StephenAtHome I’m in. See you September 8th my man https://t.co/INl40CfrQ4

If nothing else, Colbert and Bush have made the first episode of The Late Show must-watch TV.