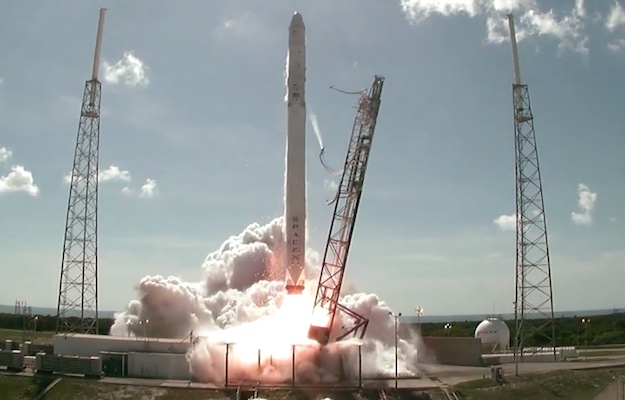 SpaceX early on Sunday launched a Falcon 9 rocket into space from Cape Canaveral with the intention of delivering supplies and food to astronauts aboard the International Space Station. Alas, just two minutes after launch, the Falcon 9 rocket began to break up mid-air, ultimately exploding after being consumed by fire.

At the time of this writing, SpaceX is still investigating the root cause of the malfunction. Per usual, engineers will examine HD video of the launch to determine what went wrong, where, and why.

DON’T MISS: Reports Saying Beats Headphones Are Cheap May Have Been Grossly Exaggerated

As The Verge notes, the “mission was also going to serve as the third test of SpaceX’s plan to make a reusable rocket. The first stage of the Falcon 9 was supposed to separate three minutes after launch and land itself on a drone ship at sea.”

If you recall, SpaceX’s previous two attempts to land a reusable rocket onto a floating ocean barge were not successful. The more recent mishap occurred this past April when a SpaceX rocket came extremely close to pulling off a perfect landing before fatally swerving ever so slightly before touching down. As a result, the rocket toppled over and exploded upon impact.

Falcon 9 experienced a problem shortly before first stage shutdown. Will provide more info as soon as we review the data.

There was an overpressure event in the upper stage liquid oxygen tank. Data suggests counterintuitive cause.

That’s all we can say with confidence right now. Will have more to say following a thorough fault tree analysis. — Elon Musk (@elonmusk) June 28, 2015

Video of the explosion can be seen below: