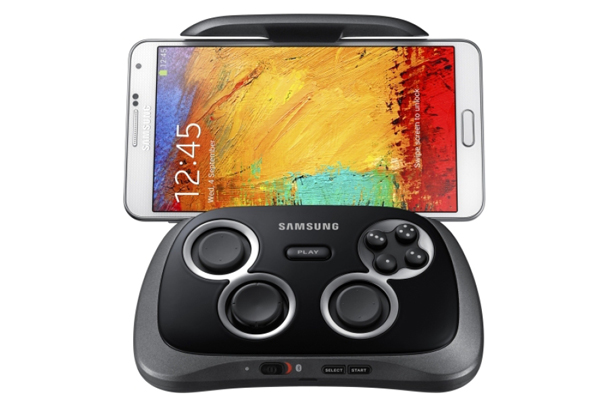 Dedicated portable consoles like Nintendo’s 3DS lineup and Sony’s PlayStation Vita provide gaming experiences that aren’t even approached by today’s smartphones and tablets. But as top video game developers continue to embrace Android and iOS, and as mobile devices get more powerful, will dedicated portable consoles still have a place in the video game market a few years from now? Smartphone and tablet penetration continues to soar but when it comes to gaming, on-screen controls bring serious limitations to the mobile video game experience. The solution for those looking for a better way to game on the go is to spend hundreds of dollars on a separate console — but why not spend a fraction of that on a gaming controller attachment like Samsung’s new Smartphone GamePad?

Samsung on Tuesday unveiled a smartphone video game controller attachment, and it looks like a significant improvement over its early efforts that were shown off alongside the Galaxy S4 during its unveiling. The controller can accommodate any phone running Android 4.1 or higher with a display that measures between 4 inches and 6.3 inches diagonally, and it connect to devices via Bluetooth.

As the mobile video game and dedicated portable console game experiences converge, it becomes increasingly likely that game controller attachments like Samsung’s new GamePad are the future of mobile gaming. Mobile memory modules and removable memory cards constantly get cheaper, and mobile devices are already more powerful and more capable than dedicated portable video game systems. The addressable market with smartphones and tablets is also massive, of course, so it’s likely only a matter of time before big developers fully embrace these devices and regularly offer true console-quality games for iOS and Android.

The Smartphone GamePad already has 35 compatible titles including Need for Speed Most Wanted, Prince of Persia: The Shadow and the Flame and Modern Combat 4: Zero Hour, and it is available starting immediately in Europe. Samsung hasn’t stated when the device will be available in the U.S., though it did say that the Smartphone GamePad will launch in additional regions over the next few weeks.

The Smartphone GamePad instantly transforms the user’s Galaxy smartphone or tablet into a portable gaming console or even a home console. Through its premium, easy-to-carry design and durable steel frame, GamePad is attachable to mobile devices ranging from 4-inches to 6.3-inches, allowing users to play games wherever they are. Users can also connect Galaxy devices to their TV through an HDMI cable or AllShare Screen Mirroring for video game console experience from their living room.

GamePad easily connects with smartphones and tablets through Bluetooth pairing. The most convenient features optimized for Samsung Galaxy devices running Android 4.3 such as Galaxy Note 3, S4, Note II, and S III enable easy connectivity with GamePad via NFC tag and quicker access to games via the “PLAY” button.

With just a tap of the “PLAY” button, users can easily access the Mobile Console app, Samsung’s new integrated game launching app that opens in conjunction with GamePad to allow users to conveniently browse and purchase game pad supported games. Users can save money by enjoying reasonably priced console-quality games without the expense of additional gaming systems, as Mobile Console features games across a variety of categories including traditional racing titles such as EA’s Need for Speed™ Most Wanted and Gameloft’s Asphalt8 : Airborne, first-person shooter titles such as Gameloft’s Modern Combat 4 : Zero Hour, sports titles such as SEGA’s Virtua Tennis™ Challenge, and action titles such as Ubisoft’s Prince of Persia : The Shadow and the Flame. The Mobile Console app is available for download through Samsung Apps or by tapping the GamePad’s ”PLAY” button, and offers 35 dedicated games at launch with much more to come in 2014.

The GamePad is is currently available in select European markets and will be available in additional regions in the coming weeks. The availability of the GamePad varies by market.