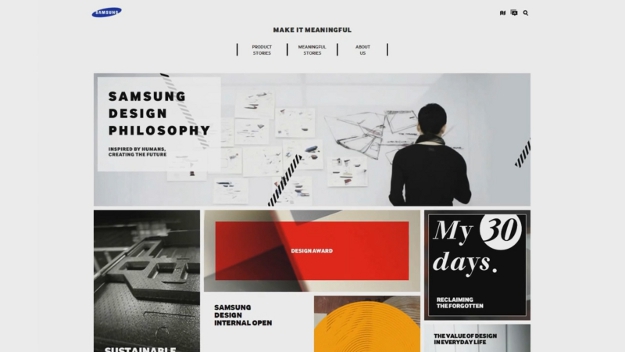 After teasing it a month ago, Samsung released a website today that highlights its design prowess under the tagline of “make it meaningful.” The website explains its design philosophy, showcases some of its best designs, and lists the design awards it has won. According to the website, Samsung designs with three principles in mind: balance of reason and feeling, simplicity with resonance, and meaningful innovation. Samsung says it “believes in the value of people’s dreams. Therefore, our design should begin with empathy for people’s lives.”

It goes on to say that Samsung “strives to create a better future with our users.” Along with a video that also explains its design philosphy, Samsung features some of its best designs from the past few years. For example, Samsung explains how it designed a washing machine specifically for India. It also explains the design behind its gorgeous S9TV.

Samsung also touts some of its more popular products, such as the Galaxy S5 and the Galaxy Note 3.