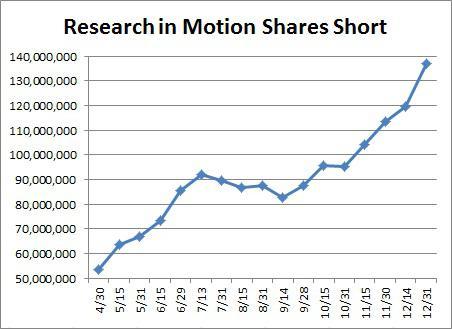 RIM’s (RIMM) share price has staged an impressive comeback since last October, when it bottomed out in the $6-range before steadily climbing to the $15 range in early 2013. But short sellers are apparently unconvinced that the RIM rally is for real, as Seeking Alpha reports that “from the end of April to the end of 2012, the number of shares short in Research in Motion skyrocketed from 53.7 million to more than 137 million… a rise of more than 155%.”

To put this into perspective, this means that more than a quarter of all RIM shares are short at the moment, meaning that a substantial number of people holding RIM stock right now expect it to tank in the near future.

Of course, RIM can prove these doubters wrong by making BlackBerry 10 a smash hit, but this kind of massive shorting is indicative of the skepticism that RIM faces as it prepares to release its next-generation mobile operating system.