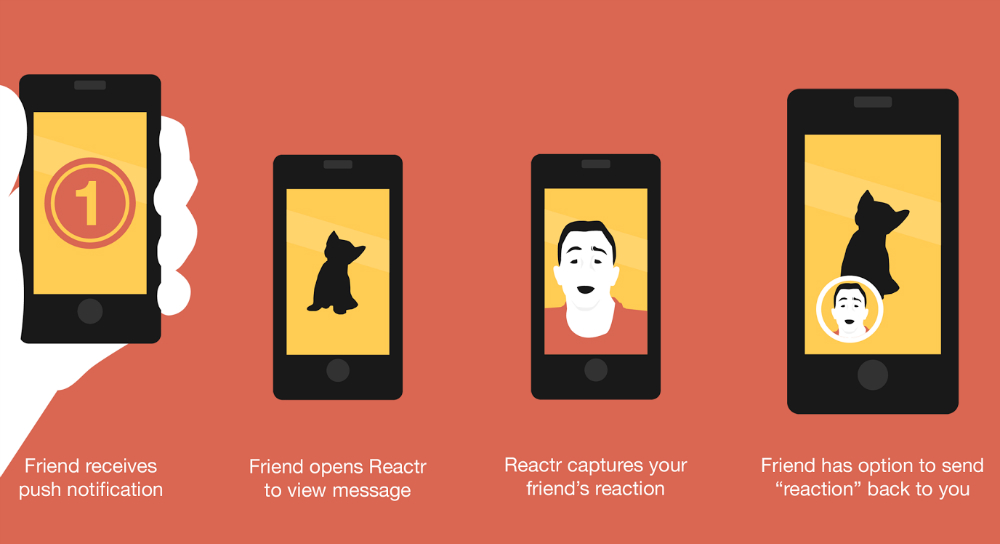 iOS and Android users who share a lot of images and videos with their friends and would like to see the actual expression on their faces when they receive the photos and clips can try out Reactr. The application, which was launched on iOS last fall, is now also available in the Google Play Store as a free download.

What the app does is allow quick sharing of media files and messages like other apps do, but on top of that Reactr has a feature that will let the sender get actual visual feedback showing the reaction of the recipient.

“The idea for Reactr came after I had sent a funny picture to my friends only to receive countless ‘Haha,’ ‘OMG’ and ‘LOL’ responses. I realized I was missing out on some priceless reactions. Then, it occurred to me that this was something missing from today’s photo and video-sharing frenzy,” Reactr’s developer Ash Gilpin said. “Reactr provides a platform for allowing a more natural form of interaction between people, through photos and videos.”

No matter what kind of pictures or files users share, the app will only send a photo or video feedback reaction to the sender if the recipient agrees to it, and won’t take unwanted snaps that are automatically uploaded back to the sender.

Virginia Beach, VA USA / London, UK, 2nd April 2014 – Ever sent a friend a photo or video and wanted to witness their reaction rather than waiting for the same old ‘LOL’ or ‘OMG’ response? Well, it’s now possible to let them know how funny, shocking or disgusting it was. Launching globally today is Reactr, a new social app for Android that captures the instant reactions of friends once a photo or video has been shared with them.

Available to download for free, Reactr is a quick, fun and simple-to-use photo and video-sharing app with a twist. Once a photo is taken or a video recorded, users can type a message and then share with their friends. Once received, the recipient then has the option of sharing their reaction back with the original sender. The reaction is then shared with the sender for them to see first-hand what they thought.

“The idea for Reactr came after I had sent a funny picture to my friends only to receive countless “Haha”, “OMG” and “LOL” responses. I realized I was missing out on some priceless reactions. Then, it occurred to me that this was something missing from today’s photo and video-sharing frenzy,” said the man behind the Reactr, Ash Gilpin. “Reactr provides a platform for allowing a more natural form of interaction between people, through photos and videos.”

The key features of Reactr include:
Snap a photo or record a video, write a message and share
Witness an instant reaction through a photo or video
Users have the choice as to whether they share a reaction – no unwanted snaps
Reactr has the privacy of users covered too. The captured reaction is not automatically sent back to the sender in response. The recipient must decide if they want to send their reaction or not. Reactions can only be shared with friends too so there’s no risk of sending a reaction to someone they don’t know. People’s favourite reactions can be downloaded so they can be kept forever.

“We created Reactr because we wanted to bring something fresh and new to the photo and video-sharing space,” continued Gilpin. “Reactr is totally unique in the way it allows friends to not only share memorable moments with each other, but also see instantly what the people close to them think or feel about it. We happen to think that it’s pretty awesome and we’re confident people will love it.”

Reactr is available to download for free on Android from Google Play. For more information please visit http://www.reactrapp.com.