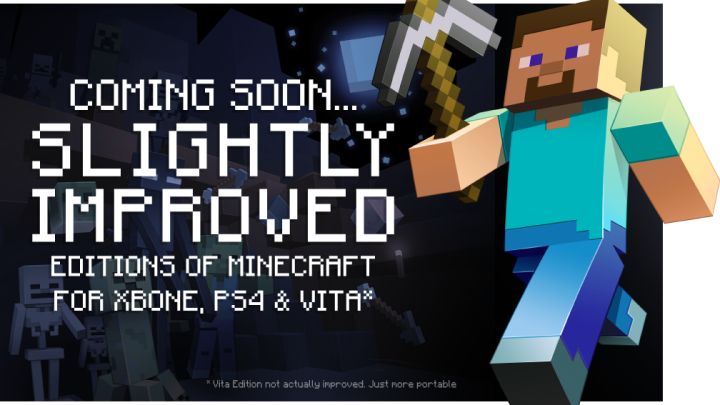 The indie game phenomenon is finally making its way to the next generation. Mojang announced on its blog on Thursday that Minecraft will be coming to the PlayStation 4, Xbox One and PS Vita in August for $19.99, rounding out the last electronic devices on the planet that weren’t able to play the game that’s solid nearly 50 million copies since its alpha release in 2009.

The PS4 and Xbox One Editions of the game will feature “significantly bigger worlds and a greater draw distance” than their last-gen counterparts. If you own either the PS3 or the Xbox 360 Edition of Minecraft, you’ll be able to upgrade to the PS4/Xbox One Editions for just $4.99. You have up to a year to take advantage of this offer on both platforms.

Much of the DLC available for Minecraft on last-gen consoles will also be transferable to the new consoles, but some skins and texture packs “are trapped in licensing deals that are too boring to get into.” Last-gen players will also be able to upload their worlds to the PS4 and Xbox One Editions, but not the other way around.

The PS Vita release will be identical to the PlayStation 3 Edition from earlier this year, but anyone who has already purchased the game for the PS3 will be able to download the Vita Edition for free. PS Vita players will be the only ones who can play cross-platform with their PS3 companions.