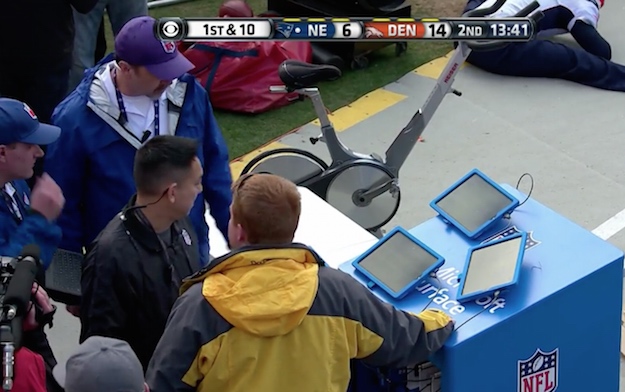 The old adage of there’s no such thing as bad publicity might very well be a rule of thumb for celebrities, but it certainly doesn’t apply to tech companies. Microsoft yesterday learned that the hard way during the NFL’s AFC Divisional Playoff game between the Denver Broncos and the New England Patriots.

During the Patriots’ first drive of the second quarter, word began to spread that the team’s Microsoft Surface tablets were refusing to boot up. As a result, the Patriots coaching staff were unable to review pertinent plays on the sidelines, thus preventing them from making fully informed play calls (or so Patriots fans would have ou believe). Not only that, but Microsoft’s Surface failure even made it onto the national broadcast of the widely watched game.

When word of the Surface failure spread, Microsoft’s team on the ground was quick to spring into action. Ultimately, they found that the source of the problem was a connection issue rather than any problem with the Surface hardware itself.

“Our team on the field has confirmed the issue was not related to the tablets themselves but rather an issue with the network,” Microsoft said in a statement. “We worked with our partners who manage the network to ensure the issue was resolved quickly.”

How many NFL games have mentioned the Microsoft Surface tablets not working? Worst product placement fail.

Microsoft back in 2013 paid the NFL $400 million to ensure that its Microsoft Surface would remain the “Official Tablet of the NFL” for a period of five years.