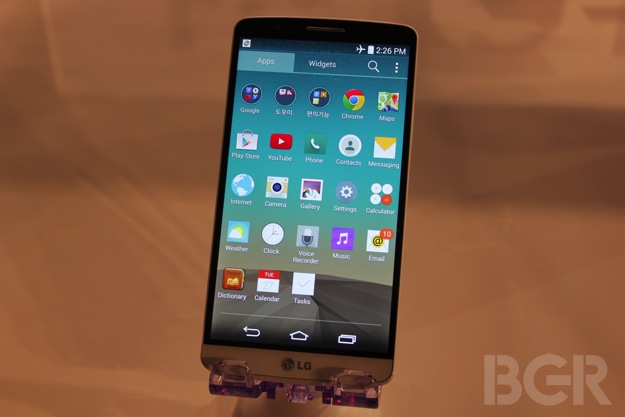 LG’s recently announced flagship Android handset has monster specs, including a 5.5-inch 2K display that has no rival – at least when it comes to flagship handsets from leading Android manufacturers – but that doesn’t mean the device won’t offer amazing battery life. In Phone Arena’s G3 battery life tests, the handset came on top of the competition, beating every top Android handset released this year, including the Galaxy S5.

When performing the same battery tests on the Galaxy S5, the publication found it to have tablet-grade battery life, with Samsung’s handset scoring 8 hours and 20 minutes of battery life in tests. The Sony Xperia Z 2 and the HTC One (M8) scored 8 hours and 10 minutes, and 7 hours and 12 minutes, respectively.

The G3 beat the Galaxy S5 by a full half hour, scoring 8 hours and 50 minutes in the same test. Even in charging time tests, the G3 beat this year’s top handsets, scoring 120 minutes, or 2 minutes faster than the Galaxy S5. The One (M8) and the Xperia Z2 need 207 and 212 minutes, respectively, to reach a full charge.

The publication notes that LG’s battery optimizations for the G3 are apparently working as described during launch, although LG has not mentioned all the tricks it uses to make sure its 2K display smartphone can offer great battery life.

“For example, the LTPS panel dynamically tweaks variables such as frame rate when viewing static images, in order to arrive at a lower power draw in the longer term,” Phone Arena wrote. “As far as the user-replaceable, 3000mAh juicer is concerned, LG claims to have replaced a lot of metal on the inside with graphite, and to have also implemented further, unspecified battery optimizations. Well, whatever it is the company did, it’s clearly working.”

A screenshot showing smartphone rankings based on battery life tests follows below.