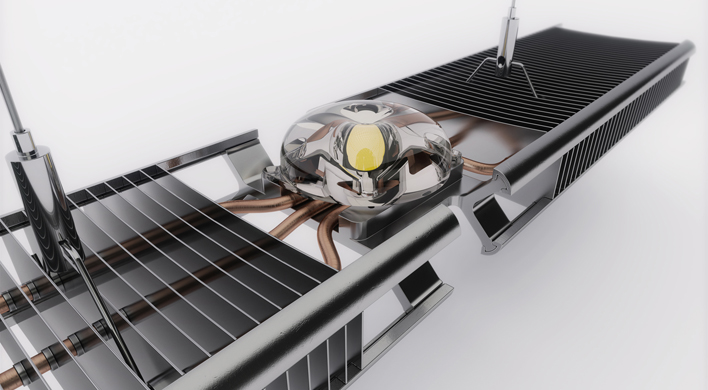 For nearly a century, lightbulbs have been the poster child of planned obsolescence. Manufacturers have been accused of deliberately designing products that only last months or years — and there is even evidence that a formal cartel called Pheobus existed in 1920s and ’30s.

Major manufacturers belonging to Phoebus pledged not to launch bulbs that would last longer than 2,000 hours. The cartel was officially disbanded in 1939, but the lifetime of a light bulb has remained suspiciously low, even with incredible advances in materials and engineering. Some of the light bulbs manufactured in Great Britain during the crisis conditions of World War II are still in use today, which some say supports the theory that a manufacturing conspiracy endured beyond 1939.

Now a British inventor is set to defy the diabolical forces of a possibly ancient international light bulb conspiracy — Jake Dyson has developed a LED lamp that will last 40 years if used for 12 hours a day. That’s a hefty life span.

The bad news is that the lamp will cost more than $2,000. If you do the math, the device will pay for itself in the long run…. but its early commercial appeal is likely going to be limited to public spaces such as airports and malls. Interestingly, one secret to the longevity of Dyson’s Aerial light lies in temperature control — radiators dissipating heat will keep the lamp always at 55 degrees or under.

Jake Dyson has a pretty close role model for industry-shaking ideas, as his father is the creator of the futuristic Dyson vacuum cleaners and even more science fictiony bladeless fans. Whether this impressive bloodline will be enough to help him stand up to the nefarious powers of Phoebus is another matter entirely, of course…